As you know, we at 12×75.com constantly have our finger on the pulse for emerging technology, social trends and hard-hitting journalism.  One thing we can’t seem to escape at the moment is the term ‘Big Data’ – the concept has been floating around for a while but it seems like more recently there has been a real push to help the average person to understand the concept.  It doesn’t just mean lots and lots of data.  Big data doesn’t just sit on a page.  It isn’t structured.  It is found in our behaviour and how we interact with others.   So for example, data about you is stored on any online profiles that you have, such as Facebook, Twitter and LinkedIn – where you live, where you work, who you interact with, and what your hobbies and interests are.  But Big Data begins with your online behaviour and how you interact – what other websites you visited, what links you clicked on, what the location was on your mobile phone, what happened after you switched off your PC, what you had for dinner that evening, and so on.  So it’s not just the person who has a Facebook profile, it’s everything they do and the times at which they do certain things and who they do them with.

For example, look at this article from LinkedIn revealing how your ‘Likes’ on Facebook reveal intimate details about you.  Here’s what was revealed:

The thing about Big Data is it isn’t an exact science, as you can tell from the fact that I went straight onto my profile, deleted Lady Antebellum from my ‘likes’ and replaced them with Curly Fries for fear of being labelled a pleb.

There hasn’t been much written about the impact of Big Data on the wine industry yet so I wondered if 12×75.com could pioneer some groundbreaking research.  Could purveyors of wine use my Facebook ‘likes’ and other data to sell me wine or even upsell me more expensive wine when I am most suggestible?

First, I investigated my own Facebook ‘likes’.  Now that I live in perpetual fear of big data being used to steal my identity, I don’t often ‘like’ anything new.  Nor do I change very much in case the overlords are watching, so my Facebook ‘likes’ are pretty much as they were when I first set up a profile on the site.  So my first view of my ‘likes’ was something of a surprise, to say the least… 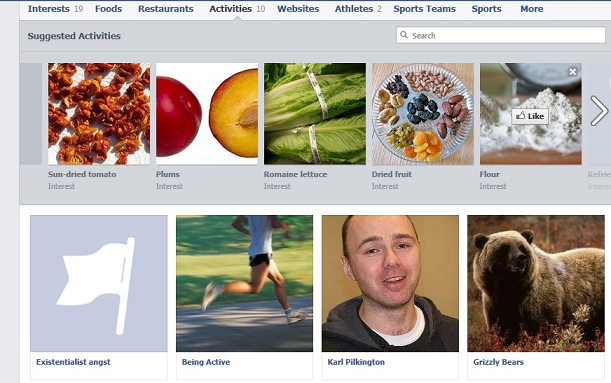 Now, from what I can gather, Facebook had predicted, based on the fact that at some stage in my past, I had ‘liked’ Existentialist angst, being active, Karl Pilkington and Grizzly Bears, that I would be drawn to the popular ‘activities’ sun-dried tomatoes, plums, Romaine lettuce, dried fruit and flour.

Far beyond the question as to how Facebook could peg me as such a dullard is the question as to why flour has it’s own Facebook page?  (well, it does.  It had 10,834 ‘likes’ already.  Now 10,835 since I immediately warmed to its plucky spirit and clicked ‘like’.)

But surprisingly, I couldn’t see any targeted ads relating to wine anywhere.  Although there was one for something called ‘Let there be Beer’, so someone in the drinks trade was obviously paying attention.

Feeling a bit safer about the whole overlords situation, I decided to ‘like’ sun-dried tomatoes as well.  After all they are very nice, and I felt it gave my profile a sort of upmarket Mediterranean allure.  I suppose that the drinks trade will take a while to catch up with big data.  I shut down my PC, got in my car and popped into town to get a nice bottle of wine to go with dinner.

It wasn’t until much later when I was enjoying a lovely Salice Salentino that I realised what must have happened.  It was the sun-dried tomatoes.  They looked so warm, and Mediterranean, and appealing…

I don’t know how they did it, but they got to me.  There’s no escaping from Big Data.  And so the next time you click that you ‘like’ Gerard Depardieu on Facebook only to find out 24 hours later that you’ve invested in a small Bordelaise Chateau with no recollection of how it happened, don’t try and tell me the overlords aren’t watching your every move.