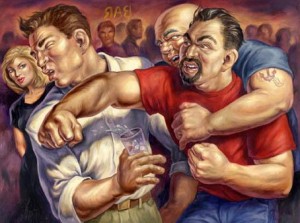 When we refer to the Bordeaux blend, we usually mean wines that are made of some of the following grapes; Cabernet Sauvignon, Merlot, Cabernet Franc, Petit Verdot, Malbec and Carmenere.  The Bordeaux style is constantly imitated in the New World, with the Californians and Australians making high-alcohol, modern blends that have been praised by the likes of Robert Parker.  But there isn’t really just one Bordeaux, style – every single wine is a different blend of grapes, and this will vary from vintage to vintage.

Blending is as important in Bordeaux as the single varietal is in Burgundy – it is the craftsmanship of expert blending as well as vinification and oak ageing that gives the best wines their solid structure and makes them capable of ageing.   Loosely, there are two main styles of red Bordeaux, the Cabernet Sauvignon dominated wines of the Medoc on the Left Bank and the Merlot-dominated wines of Pomerol and St Emilion on the left.  So what does the investor need to know about these two grape varieties?

Well, the first thing to note is that all of the first to fifth growth wines are from the Medoc region – so these tend to be Cabernet Sauvignon based.  Cabernet can be difficult to grow despite its resistance to vine diseases, but the growers in Bordeaux have a real affinity with the grape, just as the grape itself loves the gravelly soils of the Medoc.  The grape responds well to oak ageing and its natural tannin together with the oak tannins combine to give the wine a rugged structure that ensures its longevity.  Cabernet-based wines can be difficult and unapproachable in their youth, as the oak tends to dominate as well as the unique green pepper flavour that the grape exhibits while the wine is still young.

Many people assume that Merlot based wines lack the ageing potential of their Cabernet cousins, but you only have to look at great wines of Pomerol to see that they are capable of great age.  Unlike Cabernet, Merlot based wines can be soft and approachable when they are young.  The grape has a thinner skin and fewer tannins than Cabernet.  The winemakers at the great Chateau Petrus tend to pick the grapes early to maintain their acidity and finesse, and to ensure the wine will be ageworthy.  The Merlot flavour is more difficult to pin down, although it is the soft berry and plum notes that its wines exhibit that make it one of the world’s most popular grapes.

But all the investor really needs to know is that it doesn’t matter whether the wine is Cabernet or Merlot based – with a rich history of expert winemaking, the Bordelais know how to manipulate each grape in order to make wines with plenty of finesse that are, most importantly, capable of ageing for a long time.  It is up to the consumer to decide who would win in a fight – personally I’ve always loved Cabernet – I love the decadent wines of St Estephe in the Medoc, but I’ve been increasingly seduced by Merlot (and Pomerol in general).  And by picking sides I would only risk missing out on some of the best wines I haven’t tasted yet, so I’d rather stay out of the argument altogether!