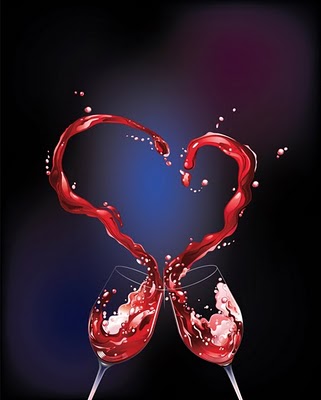 Like an increasing number of busy professionals (yes, I know, I heard it too) I met my husband on the internet.  Having moved to a new area and been single for a while, a friend suggested internet dating to me and after a few sherries I decided to give it a go, and signed up to a six month trial on an appropriate dating website.  One week later I met my husband, who I have now been with for over eight years.  I can’t help but begrudge the five months and three weeks of online dating that I signed up for but didn’t use, but it seemed rather futile and indeed offensive to my future husband to continue using the site when I had already met someone.  Anyway, with yet another anniversary coming up, we’ve been reminiscing about the slightly bizarre circumstances in which we met, and as usual my mind went off in another direction.  The direction of wine, to be precise.

I still think it is quite romantic how we met, but a lot of people still find the idea of simply advertising yourself online rather cold and impassionate – in fact, the exact opposite of romance.  I started thinking about the science of compatibility and wondered whether we could apply this to finding a wine that we like, in the same way that I ‘shopped’ for a partner online.  I decided to see what existing tools were out there to find the wine that I would be most compatible with. And that’s when I stumbled across this very hilarious tool that helps you to “find your wine personality”.   Brilliant, I thought, that’s exactly what I’m looking for.

Question one.  “How would you describe yourself?”  Now this isn’t hilarious in itself, but wait until you hear what the options are:

“Trendy, fashionable, attractive and stunning”.  I would say probably not.

“Model looks, worldly, young and vibrant”.  Isn’t that just the same as the first one?  Again, probably not.

“Successful, popular, adaptable and an extrovert”.  NO.

“High standards, selective, always dressed to impress”.  At this point, I should mention that today I am actually wearing leg warmers.  And a hat with animal ears.  Next.

“Impulsive, intense, whole hearted”.   A bit vague, but with all the other options demanding some degree of style, unachievable attractiveness or surprising charisma, this is the option that I plumped for.

I won’t bore you with my answers to the entire quiz, although I will mention that my favourite question is “What animal do you most identify with?” The second option is “Chameleon, Shrek or race horse”.  I’m just not convinced that Shrek is a real animal.  I also liked “if you could bring three things to a desert island, what would they be?”  where one of the options is “a suitcase containing all your necessities, Evian spray mist and a case of Fiji water”.  Surely no one would be stupid enough to pick option A, “Cell phone, Ipod, Prada sandals” when they could just stuff them in the suitcase containing all their necessities and still have room for Evian spray mist?

Anyway.  The results were in.  My wine personality was Cabernet Sauvignon.  Evidently I have a strong and powerful character that people are drawn to.  In fact, I would be a great accompaniment for a medium rare peppercorn steak.  Then unable to resist, I took the quiz again, but providing completely different answers.  This time I was Chardonnay.

To conclude, I couldn’t entirely remember what I was trying to prove, but I don’t think a leg-warmer wearing introvert with a below average level of unsurprising charisma like me is in the target audience of this particular quiz.  Perhaps trying to draw a parallel between internet dating and using the internet to find the wine I’m most compatible with is a step too far, even for me.  And I certainly didn’t want to trivialise the world of online dating, to which I owe a lot.

But just in case I am wrong, I’m going to buy a bottle of Cabernet Sauvignon on the way home this evening….