Is there a grape variety that is a good name for a child?

I think the main reason Mrs 12×75 says I shouldn’t be allowed to name a baby is because I have scared her off somewhat.  It all began with a conversation not long after we met whereby I was extolling the virtues of a really cracking Merlot that I had brought round in an effort to impress her.  One thing led to another and before I knew it the ill-advised words came out of my mouth ‘I think I would probably want to call my first born child… ‘Merlot’.

Needless to say this was met with a raised eyebrow and a concerned look.  ‘Don’t you think he would get teased in school, for having a funny name?’  Making it worse, I defended my assertion.  ‘Don’t be ridiculous, I’d only call it Merlot if it was a girl.’ 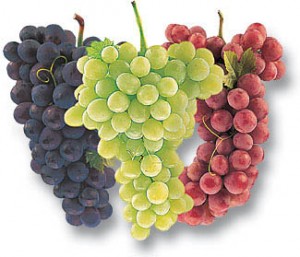 I’d never dare to have the Merlot conversation again, but I have been wondering whether there might be an alternative grape-based name that I could sneak past my wife.  After all, there are so many grape varieties, I know a lot of obscure ones but that barely scrapes the surface.  So there might be a brilliant grape-based name that I haven’t thought of yet… and I could present it to Mrs 12×75.She might like it.   She might be none the wiser.  She might just think I’m really inventive.  So I made a shortlist….

Chardonnay – an obvious choice, some might think. Unfortunately I just think it is a horrible name and certainly not one that I would inflict on my daughter, no matter how much I love the grape.

Arneis, Shiraz – too predictable.  Some people actually have these names, but I doubt that they are named after grapes.

Bacchus – What a dynamic name for a grape, named after the very God himself!  However, it is a bit of a crap grape, mostly used to make wines that are dubious at best here in England; and also however dynamic my kid is, I doubt he could pull off ‘Bacchus’.

Pedro Ximenez – How about a name with a Spanish flavour?  My wife wouldn’t suspect a thing, would she? … This one is a definite possibility.

Touriga Naçional – A strong, dynamic name – and who wouldn’t want to be named after the noble grape of Portugal and Port, that can age for hundreds of years?  Another contender.

Aragonez – I liked this one as it sounded a bit like a Musketeer.  Again, not sure if I could slide this one past Mrs 12×75.  But, we’ll see.

Xarel-lo – the Cava grape of Spain.  My child would be some sort of wine superhero.  Although they might also get beaten to a pulp for having a stupid name.   And yet, it is so brilliant.

It swiftly turned out this was NOT a good idea.  Although, I did not peruse a complete list of Vitis Vinifera grape varieties- I merely called upon the varieties I already know.  So perhaps someone else will have the answer.  Is there a grape variety that is a good name for a child?  Or perhaps a vineyard, or winemaking process, or vine training method?  (Incidentally, I think ‘carbonic maceration’ and ‘double guyot’ border on child abuse)   or the name of a brilliant vineyard? (all the children named Romanée-Conti, hands up?!)  Hmm.