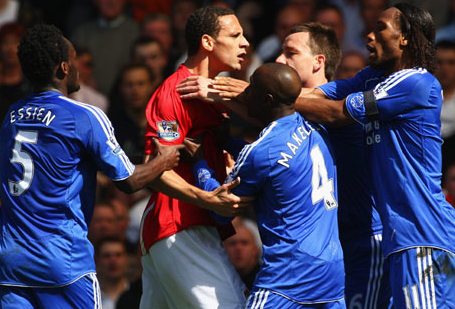 I have witnessed two sommeliers engaging in the equivalent of footballers going forehead to forehead after a clumsy challenge. One sommelier favoured a certain wine with a dish, the other favoured a different wine. Other guests picking up on the deteriorating atmosphere suggested we drink both wines so everybody would be happy, of course they weren’t; Sommelier no 1 lost no time in panning sommelier no 2’s choice and likewise Sommelier no 2 has a clean swipe at sommelier no 1’s wine. Both wines were perfect with the dish and really very similar but sommelier no 1, clearly the less robust of character, angrily left the meal before dessert leaving his colleague in open space to continue to ridicule his wine choices. There is often a bit of “mine is longer than yours” in the food and wine matching arena. Sommeliers overruling other sommeliers with a choice of wine just because they can, not because the initial selection was poor.

Food and wine matching is not an exact science certainly not as exact as some winey and foodie people would lead us believe. In fact it is opinion based and really just a very broad guideline to help you to avoid making a fool of yourself in front of people who think they know more than you about the subject.

A brief trawl of blogs and websites will throw up sentences such as this;

A sea bass is good with a “nice” Sauvignon blanc.

Now, is the word “nice”, a subjective “nice” meaning; I like it, or is it an objective “nice” meaning; sauvignon blanc is herewith designated “nice” by me, the writer. “Nice” is far too vague a description for a wine, yes I accept that of the classic varietals Sauvignon blanc is probably the easiest to recognise however it does have many different flavour profiles, but what exactly does the writer mean by “nice”?

The suggestion may only be a broad suggestion but why is so much emphasis put on food and wine matching when such vague recommendations are commonly given.

Wine sales statistics suggest that considerably more wine (Sauvignon blanc) is consumed on its’ own than with food (sea bass). Yes there is a small minority who agonise and discuss every sip and mix wine and food in each mouthful and generally are poor company for the long term, and probably end up single.

Drop down a level and you start to get those who like a good food and good wine and who taste and converse and socialise and drink and perhaps might even go for a beer on the way home!

Moving down the spectrum you encounter those who have a glass of wine with their meal, purchased and served generically as a “glass of wine” red or white.

Then you descend to those who tend to consume a lot of cheap wine for the delivery of alcohol alone, the will have the food after the wine. If they are unwell the following day they might suggest that the blossom hill doesn’t go with a batter sausage deep fried mars bar and a large single.

One of the most irritating and embarrassing incidents is being overruled by a wine waiter or sommelier. If you go out and want to spend your money, you have every right to choose the wine that you want to drink, yes we are all open to suggestion, but I am not always convinced that the sommeliers choice is honest and even if it is, he is human. If I want my sea bass with a muscular Shiraz then so be it!

I always taste tinfoil when salmon is served with cabernet, shiraz or other full bodied intense reds. It isn’t very pleasant! Probably a better overall approach would be to suggest to people what definitely wouldn’t or doesn’t work as a food and wine pair. There are much fewer possibilities.

So called experts with high profiles tend to be very general when naming a region or grape without any reference to the vinification/age/finishing which of course will have a huge impact on the taste of a wine. There are far too many variables within the flavour profiles of the food we produce even if we follow recipe.

There are quite a few websites sustaining themselves on this sport. Are people as interested in all this waffle as magazines, newspapers and blogs etc. suggest?

Many tell us that we will enjoy our wine more by pairing it with food. Is it such a sin in this life to admit to enjoying drinking wine because you like drinking wine!

Why dress it up by saying it goes with food. I wonder is this part of the latent stuffiness of an industry trying to avoid being lumped in with vodka and alcopops.

Many of the suggested pairings are so general that they contradict the experts who are so specific.

If you were to do it properly you would need vintage charts, exacting temperatures exact matching ingredients to be certain of a perfect pairing.

Then you find those horrid infographics that are lightweight, very general and most of them look like safety charts from a kindergarten.

If my infographic says I should have x with y and there is a sauce with z in it then the chart says I must have both Chardonnay and Sauvignon blanc!!

There are simply far too many right answers in food and wine matching.