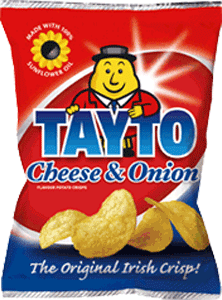 One of the more horrible products I’ve encountered this year as a taster is Irish firm Tayto Crisps’ first venture into chocolate bar manufacturing.  Tayto Cheese and Onion crisps are legendary in Ireland, and I’d have to agree they are definitely a cut above other popular crisp brands.  Not satisfied with having achieved cult status and having his crisps sold in the ‘Ethnic Foods’ aisle at Asda for Irish people that cross the channel and start yearning for a taste of home, the charismatic Mr Tayto decided to combine his most popular flavour with the world’s favourite sweet treat.  Yes, that really happened.  And if you don’t believe me, you can read about Tayto’s limited edition chocolate bar flavoured with cheese and onion crisps here.

Now, as you can imagine, this was at best a hilarious marketing experiment and at worst a really terrible idea that made a lot of people quite ill.  But looking through the comments on Facebook, there were quite a few vocal supporters of Mr Tayto’s new venture, that were quick to defend the unlikely combination of cheese and onion crisps and milk chocolate.  Although most tended to agree it was the most horrible thing to come out of the British Isles since the Scottish decided to start deep frying Mars Bars, it must have been reassuring for Mr Tayto (who has his own Facebook page under ‘Local Businesspeople’) to see that he had some supporters.  You might call this a Marmite reaction – although I suspect the manufacturers of Marmite would hope to have around a 50:50 ratio on their ‘love it or hate it’ slogan rather than just the occasional glimpse of anything other than disgust.

I was reminded of the Tayto chocolate recently when I tasted what I can only describe as a Marmite wine.  Drinking an Argentinian red with friends, that I had selected, I was aware of being the only person at the table that just didn’t seem to like it.  I thought the wine, a Malbec, would really suit the food we were having.  It would be robust enough to stand up to beef in a rich gravy, and everyone at the table would complement my excellent wine matching capabilities… or so I thought.

I kept swirling and sniffing.  Was it a stink of sulphur that would eventually lift?  I didn’t think so, and if it was, no one else had clocked it.  It had a stelvin closure and so it wasn’t corked.  We probably ought to have decanted it, but it didn’t seem like the flavours were particularly muted – I just didn’t like them.  What was that, prunes?  Then something bitter.  I could have sworn it tasted of beef, but perhaps  the aroma from the food was messing with my mind.  It just wasn’t for me at all.  But everyone else seemed to be enjoying it, I even double checked in case they were just being polite, so I stared thoughtfully into my glass and tried to get to grips with it until it was gone. 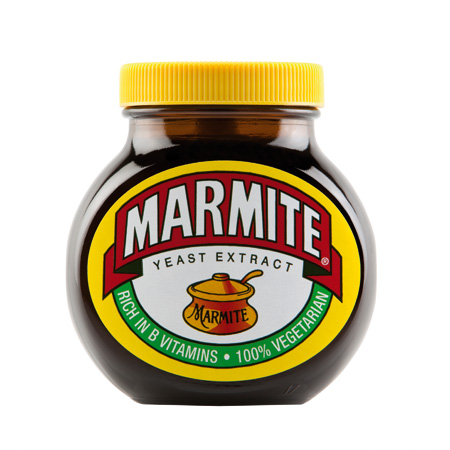 Now, Marmite wines are not to be confused with ‘wines that taste of Marmite’, a more gruesome prospect altogether, and one which I have also encountered.  Even as a Marmite lover, I can’t condone wines that taste of Marmite.  But my Malbec was much more complicated than that.  It reminded me of wines I’ve had in the past that I always seem to fall on the ‘hate it’ side of the Marmite fence on.  For some reason I’ve never got to grips with White Rioja – the only one I’ve ever not hated cost about 3 Euros in a Spanish supermarket, I’ve had wines at £15 that I similarly just didn’t get on with.  Lebanese wines – I know we’re supposed to love cult wines and I’ve had many fine bottles of Chateau Musar, but I’ve also had some truly terrible ones whose flavours I just couldn’t learn to love, even when other tasters have been raving about them.

The funny thing is, I go back to trying Lebanese wines and white Riojas time and time again – I genuinely think there will be one that impresses me if I just keep trying them.  Whereas wines I’ve had absolutely no reaction to would not entice me to go back for more.  You could put this down to some sort of obsessive borderline alcoholism, but I tend to think it is the desire to get to grips with wines that I think I probably just don’t understand yet.  So although I might not find much to love about the Marmite wines, I still have respect for them.

I hope Mr Tayto wasn’t disparaged by the negative comments about his chocolate/cheese & onion crisps infusion.  If nothing else, it really got people talking about his brand – he’s effectively become the Miley Cyrus of potato based snacks.  Captain Birdseye could only wish to achieve such notoriety in his fishy domain.

Winemakers, be proud of your Marmite wines, and rest assured there will come a time when my humble, ever-evolving palate is ready for them – as long as they don’t taste anything like Mr Tayto’s experiment, I’ll learn to love them eventually.