Multiple publications have reported this week on billionaire wine collector Bill Koch losing his bid to reinstate a law suit against Christie’s, who he claims have ‘sold him fraudulent wines for years’.  Allegedly he waited too long to sue.  What is interesting about how Koch’s case fell down is how frequently it gets compared to the very product that the case revolves around as you will see here in the report on The Drinks Business website.  ‘Koch’s case turned to vinegar a long time ago,’ says the opposing counsel… and so on.  Aren’t you clever.  Oh, and ‘quit your wine-ing’ – Daily Mail.

It is alleged that Koch knew the famous Jefferson bottles from wine rogue Hardy Rodenstock’s collection were fake, but bought them anyway in an effort to gather evidence against Christie’s.  What was really interesting on this article though was the comments at the bottom.  Someone has commented that he knows a collector in Hong Kong that purchased five of the bottles – and they seemed fully aware that they might be fake, and even joked about it.  The second comment takes a swipe at collectors like Koch driving the prices of fine wines up – and then finishes with, brilliantly ‘I hope he buys some Etruscan olive oil to make the billionaire’s vinaigrette’.  What?!

With Rudy Kurniawan in the headlines at the moment as well following his arrest earlier this year, this topic really won’t be going away anytime soon.  Additionally, Bill Koch does not seem like the kind of fellow to just let this drop, does he?  So, rather than regurgitate the facts or talk about wine fraud any further, we at 12×75.com would like to provide some light relief from the topic.  And here’s how…

We’ve had this idea, you see.  All this talk of fraud just reminds us that many of the best paid people in our industry feel terribly uncomfortable about it, and some of them have been shamed by lavishing praise on wines that turned out to be fraudulent.  This Rudy Kurniawan fellow was pulling the wool over their eyes on a regular basis – blending together cheap Californian wines and then re-labelling them as expensive Clarets.  And that’s where our idea comes in… Why not make the most of Kurniawan’s blending skills?  Most of us can’t afford Petrus, but blenders like Kurniawan could potentially knock something up that tastes similar enough that even the best palates in the world are fooled.  So why not set him to work, blending a series of substitute ‘first growth-style’ wines?

If we look around the shelves in the supermarket, we see tons of products that are substitutes for the brand leader, or designed to in some way stand in for another product. ‘I can’t believe it’s not butter’, springs to mind, a butter-like product so ridiculous that it has spawned a series of imitations of it with even stupider names, ‘Utterly butterly’, ‘Butter me up’ and brilliantly Morrison’s own ‘Better by far’ (I don’t think their marketing people got the joke, do you?)

So… once we are satisfied Kurniawan has paid for his crimes, we get him to work on the new range of affordable imitation superwines.  ‘I can’t believe it’s not Petrus’.  ‘This probably isn’t Screaming Eagle but it’s as close as you’ll ever get’.  ‘Oh my goodness, for a moment I thought this was Chateau Margaux, but it probably isn’t…’ and so on. 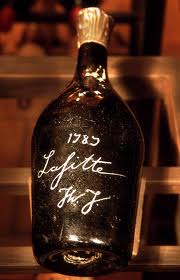 And as the roots of the constituent parts of these imitation superwines are probably from the supermarkets, I would suggest that this is exactly where they ought to be sold.  Two for a tenner – or included in the £10 meal deal with a pre-prepared lasagne, a side of salad and a cheesecake.  You could even purchase a bottle of billionaire’s vinaigrette on the side, expertly blended by Kurniawan and his apprentice, Hardy Rodenstock.

Would we be seen to drink these supermarket imitation superwines?  What impact would they have on the industry?  Would we ever dare to taste them side by side with the wines they were imitations of?  Possibly not – the truth might be too hard to handle, if what we’ve read about counterfeiting is to be believed.

Anyway, you read it here first.  So the next time you are in Sainsbury’s perusing the meal deals and out of the corner of your eye you spot a 2 for £10 sign above a bin full of ‘Crikey, this isn’t DRC but it’s not a bad effort’, think fondly of 12×75.com and how we’ve turned wine fraud into a positive thing….