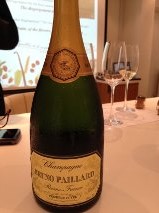 Every now and then, ordinary folks like me get an offer they can’t refuse, and that’s how I wound up saying ‘yes please’ to attending a tasting of Bruno Paillard Champagnes accompanying a four-course meal at Michelin-starred restaurant Alain Ducasse at the Dorchester last year.

Reading that first sentence back, I wish all my articles started like that, but as regular readers will know it is much more likely I will start by recounting a trip to Aldi or an altercation with a nutter at a beer festival. So as much as I would like to pretend that this was just another day in the office for me, it really wasn’t. It was special, and as such, I want to share it with you.

There’s a good chance you won’t have come across Bruno Paillard’s wines. His sub-500,000 bottles per year production is sold directly to restaurants and fine wine shops. There is a clear focus on Michelin-starred establishments. I had heard of the wines, but never tasted them. I was fortunate to sit next to Mr Paillard at the meal, a delightful, thoughtful fellow who perpetually apologised for his poor English while speaking it impeccably. You can’t help noticing in conversation with him that his passion for bubbly extends far beyond what’s in the glass. He literally seems to live and breathe it.

Working as a broker in Champagne in the 70s, Paillard witnessed the emergence of big groups within the region and consequently changes of style and tradition. The changes didn’t sit well with him and he found himself thinking about how he could establish a pure, elegant and mineral-biased Champagne in the complete opposite direction to the way things seemed to be going in the region. In 1981 he established his own Champagne house and the wine bearing his name was born. ‘The name is the creator, the style, the nose,’ he explained.

One of the features of his wine that he speaks most passionately about is the fact that every bottle has the date of disgorgement written on it. ‘When Krug started doing that, everyone started talking about it, but I had been doing it for 30 years!’ exclaimed Bruno. His reasoning is that the consumer deserves to know the date of disgorgement because a different kind of maturation begins at that point. Paillard wines are matured in bottle up to 4 times longer than required by regulations before release. When the winemaker considers them ready to drink, in other words. Comparing the disgorgement to surgery, Bruno explains that when something is taken out, there needs to be a period of recovery, of convalescence. The longer the wine is matured on lees, the longer the recovery period needs to be. This isn’t the only feature of the wines that makes them different – to find out more you should have a look at the Bruno Paillard website. 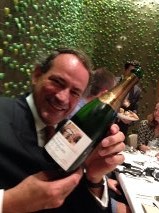 After the 4-course meal I felt like I required a period of convalescence too, but instead we were taxi’d to the second part of the tasting – a masterclass of the ‘Old Dégorgement Collection’, again with the man himself, held at The Antique Wine Company. In the taxi, Bruno asked whether there might be somewhere en route that he could stop to buy some reading glasses in order to read his notes for the presentation. Accompanying him was François Colas, who remarked that he must have accumulated a pair of reading glasses from every city in the world he has visited. During the presentation he seemed to speak from the heart and I don’t recall him actually using the reading glasses.

I had travelled to London by train, so after the tasting I had an uncomfortably long walk in high heels back to Euston. I’m not sure this is normal behaviour but after I’ve tasted some really amazing wines, I like to have a glass of something awful to remind myself just how amazing those wines must have been, so I headed to the bar and ordered up something white and cheap and Californian. I felt grounded, but not in a good way, and it cost me £6 for the privilege. I sipped on it and reflected on my day, and thought about how I might summarise it in a way that would be interesting to 12×75 readers.

I’m a part time wine writer and considerably lacking in the authority of Jamie Goode, Michael Edwards or any of the other attendees, so I realised that any write-up I did about this experience was going to have to be approached from a different angle. If you would like to read what a very experienced taster thought of the Paillard wines, I suggest you read Jamie Goode’s report here. (Incidentally, that’s me in the background of that picture, partially obscured by Bruno’s raised glass!) If you want to see my tasting notes I’ll be happy to share them but I’m not the best taster to be honest, as my experience of wines at this level is embarrassingly lacking these days. But if you want to know why I, Steph Knipe, daily drinker of ordinary wines, earner of a modest income, Aldi ambassador, 2-for-1 Groupon deal restaurant devotee, and all-round country bumpkin, would consider paying for Bruno Paillard’s wines that start at £50 a pop, then read on.

You see my humble palate really loved these wines. There’s an artistry about them (and when you meet Bruno, you understand why) and an elegance and a depth that sort of moves you and engulfs you. There’s finesse without showiness.  If you hate reading statements like that about wine, I’m sorry, but that’s what I wrote down as I tasted them, and that’s what I remember now as I reflect on them. That dedication to tradition and purity on which the Paillard empire is built really sets his wines apart. I’ve been fortunate in my career to taste some pretty special Champagne from the top names and while there is a lot to be said for sitting down with the man who makes them for a four course meal at a restaurant with 3 Michelin stars, I’ve long gone past the point of being seduced by the setting, and I can quickly sniff out a wine that doesn’t deliver.

I don’t part with cash easily (becoming a wine writer was largely to secure a steady stream of good wines would come to me, or at the very least, the means to purchase better wines) but when I learned that Selfridges sell Bruno Paillard Champagne, I made my mind up to buy some to put aside. It started to make the list of champagnes that are worth the money.

Some people will spend a lot on a great outfit for a special occasion. I’ll buy a great wine, and make do with an old outfit. Does that sound like something you would do? If so, well, I’ve already told you where to buy them… the rest is up to you.