So it’s about 3am and I’ve just finished dinner and at least half a bottle of wine. Having spent the last five minutes quickly flashing though this month’s edition of Decanter, I’m in the mood to write.

So for those of you who aren’t plugged in to the day to day latest in the wine world allow me to surmise the latest scandal. 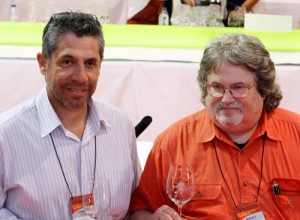 Pancho Campo is an MW based in Spain who promotes a lot of high profile wine events and tastings around the world. As a result of this he has had to hire big names to draw a crowd and these have included people like Robert Parker and Jay Miller (The Wine Advocate’s man for Spain).

Now recently a UK blogger released an allegedly authentic email purporting that Pancho was charging vineyards big bucks for access to Jay Miller. Different numbers have been quoted, but it’s looks (if true) somewhere between £23 – £40k..

It’s worth noting that so far nothing has been proven. Parker has launched an investigation, Miller has resigned (though planned well in advance, unfortunate timing) & Pancho Camp too has launched an investigation. Parker is clearly distancing himself from Pancho however time will tell the outcome of this saga. The question of if Pancho wrote the email or if Jay Miller is involved is for other blogs to discuss – that would be far too boring for us.

The other day one of my favourite movies was on the TV. A movie which in my eyes was easily one of the best movies Richard Pryor ever did – Brewster’s Millions. If you haven’t seen it, in short it’s about a failed baseball player who is poised to inherit $300million if he can waste $30million in 30 days without telling anyone the reason for his spending spree.

In fact the rules were very specific (from IMDB):

“Under the terms of the will, Brewster is challenged to spend $30 million within 30 days in order to inherit

$300 million. There are some conditions attached: at the end of the 30 days, he may not own any assets that are not already his, and he must get value for the services of anyone he hires. Furthermore, he may donate only 5% to charity and lose another 5% by gambling, and he may not waste the money by buying expensive goods and then destroying them or giving them away”

So in paying homage to this great movie, we have a challenge for you. Assuming The Wine Advocate is paying for your meals and your hotel stay, how would you spend £40,000 in one weekend in Spain following the above rules?

We are looking for specific answers, which will include some research on your part. So an example of your answer would be

Kindly send all answers by email to vimal@12×75.com and we will publish the best and most humorous ones. We will then allow our readers to vote for the best answer and the winner will get to advertise for free for one month on this very post.