We all know that we ought to decant our best wines, in order to really show them off to their full potential.  But let’s be honest, how many of us just don’t bother?  Isn’t it true that rather than optimising the taste of our wine through decanting, we often choose instead to drink it poured straight from the bottle to the glass, allowing it a token half an hour to breathe (as if this will help) before complaining that it tastes ‘a bit closed’ and swirling it ferociously in the glass in the hope that the flavours will emerge.

Why don’t we bother?  Perhaps we think that some wine is not worthy of the decanter – perhaps it is an inferior bottle being enjoyed casually in front of Holby City rather than our best Bordeaux being shared with our dinner party guests.  It requires forethought.  Anyone who has ever experienced the joy of cleaning a decanter that has been left to sit might also refrain from using it where possible. 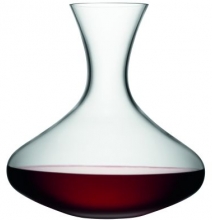 So… is it worth it? Should we decant? I have to say, somewhat hypocritically… yes.  Try to decant your reds, and your sweet whites.  A fine Montrachet or the best Chablis will also benefit, but the real benefits of decanting are reserved for red wine.  Even as I say this I know that I hardly ever bother, largely due to the Holby City syndrome and my decanter having met with a grizzly end during my last house move.  But you should, and just to remind myself why you should, I did a little experiment tonight.

I was given a bottle of wine today (thanks again, Matt and Alex) – a Gran Reserva Jumilla made from Spain’s Monastrell grape.  So I’ve decanted half of it (into a glass jug, lamenting the loss of my decanter and cursing myself for not replacing it) and the rest I have simply poured into the glass straight from the bottle.  The decanted wine has been breathing since I got home and I’ve made the effort to pour it into one of my fine crystal glasses, not the ‘everyday’ glasses that I am less likely to break while cleaning.

The non-decanted wine tastes fine.  It is in good condition, and I can detect layers of flavour.  The nose is okay.  This is a pretty big wine. I hate to say it, it is a bit closed. I can detect some plum and vanilla.  The oak is nice and soft.

So I turn my attention to the decanted wine.  The aroma actually surprises me – there is so much going on in this glass.  Roses and redcurrants and brambly spices emerge to join the plum and vanilla notes I smelled before.  The palate is big and fleshy with ripe tannins and background notes of leather and herbs.  I’ve had this wine before so I know how much it costs – as I so rarely decant I have almost forgotten how decanting can make it taste twice as much as it actually cost. I would definitely buy it again.

The reason it tastes better is that the wine has had that all-important exposure to the air that good red wine loves – it can’t get it in the bottle no matter how long we leave it open, the surface area isn’t big enough.  That’s why the best decanters have a wide base, to maximise exposure to the air.

If, like me, you hardly ever (or never) decant your wine, then I urge you to try this experiment, it will genuinely open your eyes.  Buy a £10 – 15 bottle of wine from anywhere in the world and decant half of it – then taste the non-decanted half next to the decanted half.  You can purchase a good wide-bottomed decanter from about £15 upwards – and make sure you have some nice big crystal glasses to pour the wine into.  You might just find that a wine that you thought you knew has many more dimensions to it than you would ever have believed, and if it can do that for your £10 bottle just imagine what it could do for the prized wines in your cellar.  Right, I’m off to peruse decanters on the internet….