Tony Laithwaite, thank you for taking the time to talk with us here at 12×75.com

In my opinion my first question ought to be about your rock, colleague, friend & wife; Barbara – Tell us how you went from being rebuffed by her (a few times), to eventually marrying her. 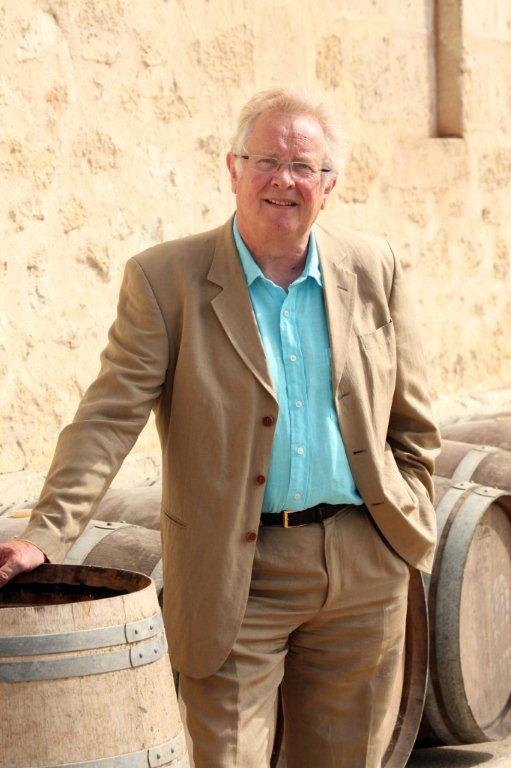 Fancied her at University (she was Rag Queen) but she didn’t take me seriously… Actually nobody took me seriously!   When we met up again a few years later she liked what I was doing, the wines and all, and decided to sort me out. First she became Managing Director (20 years), then wife (38 years). We co-chair the Company.

Your grandmother helped a lady from Bordeaux with some directions. How did that encounter get you a job on an archaeological dig in Bordeaux resulting in meeting with the Cassins?

Big Nana as the boys called her was a force of nature. She rescued a lost French tourist who wasn’t actually lost, and dragged her home for tea. I got an invitation to Bordeaux and an offer to find me a job…working on a dig in a village called Ste Colombe.  I was lodged in a barn with a pump in the yard and an ‘earth-closet’…at a Mme Cassin’s. My lucky day!

You chucked in your job on the dig to work for Monsieur Cassin at his vineyard Château La Clarière. What was it about wine that drew you away from the possibility of finding something rare & wonderful?

It was hot and lonely in a roman hole in the ground…and I found sod all. But I had come here to learn wine…and his cellar was cool… and staffed by girls that giggled and blokes well-oiled on lovely wine from breakfast onwards. But they taught me wine hands on and from the ground up.

Between university years you would return to Château La Clarière– what type of work did you do there?

I worked at the local co-op. (La Clarière winery had not yet been built). Bottled barrels, cleaned tanks. Also swept floors….one day it seemed to rain red; two floors above a bunch of tasters were spitting out over the balcony. On me. Probably that moment is when I got the ambition; become one of those up there rather than stay down here being spat on.

What was Monsieur Cassin like, and did he have any other roles outside of his own vineyard?

Bit like Yoda. With speech oddity; repeated everything 3 times to bang it in. He’d been sent to Nigeria as a boy, ended up running a huge trading company in Kano. Came out of retirement in France to save the bankrupt local co-op. Succeeded brilliantly. Great innovations. Went back to college to really learn wine. Helped me do the same. The hugely snobby Bordeaux ‘Houses’ called him the little ‘marchand de cacahuètes’ – peanut vendor. But he sure showed ’em.

How did buying a van and selling wine in the UK all come about and where did the funding come from to start this venture?

The dockers nicked a lot of my first shipments, which were expensive enough anyway. So I got this 35cwt Ford which could take 100 cases – about what I sold a month. Cost £1,200. My five producers put up £200 each. Messrs Cassin, Bourlon, Gouzon, Bernard and Guillot de Suduiraud. Lovely men. Passionate and inspiring. They all knew each other from the competition circuit… all big medal winners all fanatical on ‘la qualité avant tout’.

You told me that Bordeaux Direct (company name in those days) wasn’t really a business until Barbara joined. How did she do this, and what were the circumstances that surrounded her leaving her job to work with you.

A statistician, she compiled the viewing figures for ITV. Good job but didn’t like it because they made her fudge the results.  She dumped them and joined me for love. Certainly not money. Or comfort. Damp railway arch… Though I made an office for her out of a giant packing case. Luxury! She said she didn’t want any unnecessary costs!! Still doesn’t.

How did forming a wine club with The Sunday Times change your business?

Totally, of course.  From a packing case under a railway arch to being UK No.2 after the Wine Society in 12 months! Could easily have broken us. Skin of teeth days, they were. But our wines – authentic AOC when most UK importers didn’t bother with it (as reported in the Sunday Times). People desperately wanted ‘the real stuff’ and our wines were just that. They just tasted so different, clean, fresh, honest, not ‘cuisined’, all grower-bottled and were so reasonable. (Hardly any overheads).

Monsieur Cassin rang you to tell you that you are buying his Château. How did you initially react?

Huh! What? Bemused… it was 6 am. Very persuasive man was Monsieur. But the idea seemed like could be fun. So I said yes please! No better way to learn more about wine. Plus I’d always called myself ‘Direct Wines’…so what could be more direct than this?

What was your relationship with Monsieur Cassin like after you bought his vineyard? Would he still come and visit La Clarière?

He retired from running the co-op to devote himself to rationalising and replanting La Clarière with the finest clones. Then building the new winery. He was there all the time. Great fun for him too…he adored sitting with Claudy; the beautiful young lady he hired to run the place.

Your business grew and grew, what toll did that take on yours and Barbara’s health and what staff changes were made as a result? 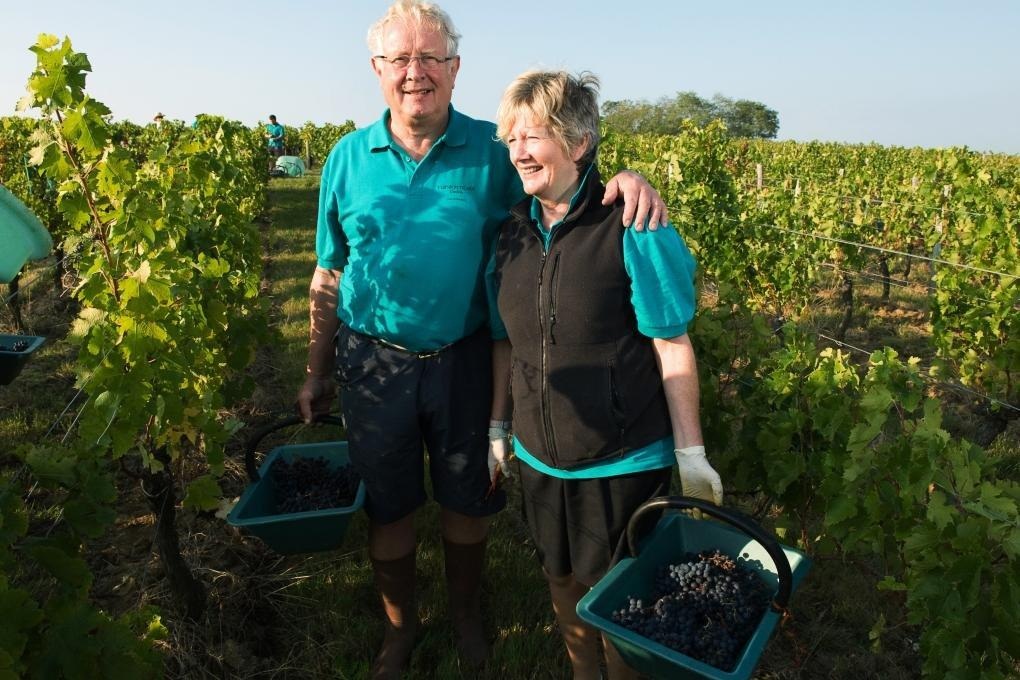 Ours was what they call a Mom and Pop affair. We had staff but not really any management apart from us. Getting over £10m it got hairy. Pressure! Blood pressure. Both of us. Barbara had a brain haemorrhage but miraculously recovered. After I had a heart attack we thought we’d better get in some management. Hired a team who took over. They did brilliantly and took us well over £100m. But I went on to have a by-pass and Barbara got cancer.  But hey, we’re still here and don’t look too bad at all, considering. Life is a lottery. Fate is lurking round the corner with his great stick. Live for the day.

With this new management team in place, how did you cope with ‘letting go’ a bit and is it true that you had to call in a mediator at one point to work with you and your new Managing Director?

Yes, that was the stress. You want motivated managers; you have to let them manage. The relationship between a Managing Director and a Founder/Owner is always difficult. We had to have our ‘Marriage Guidance Counsellor’ from the London Business School. I was to focus just on wines and writing while he ran things. We got by for 14 years. Not bad.

Tell our readers about the three vineyards that you have planted here in the UK.

When we moved to our premises in Theale there was this bit of land left covered in a huge pile of rubble. Someone suggested we cover it with soil and plant the south facing slope with 1000 vines. Chardonnay. Double Guyot… more fun than the usual trading estate shrubs. Were astonished as anyone when the fizz turned out delicious and started winning accolades!

Encouraged, Barbara then planted 4000 vines with her friend Cherry in Wyfold where we live. With young Lee on the tractor they do all the work themselves. They just won this year’s ‘Judgement’ tasting of English fizz. With Theale a close second.

Henry then planted 35000 vines on a lovely slope at Marlow and a year later we put in 20,000 on the Royal Farm at Windsor which produces its first fruit this summer.

You have a photo of The Queen in your office, how is it that you came to meet her and what was that like?

It is frowned upon to report Royal conversations. Suffice to say we believe the Queen and particularly the Duke (who is Head Ranger at Windsor and very involved in the workings of the Windsor Great Park estate) are very enthusiastic about the vineyard if a little concerned that we can make it work. I reminded her Majesty that King Henry II had a vineyard at Windsor possibly due to his wife; Eleanor of Aquitaine who sort of owned Bordeaux.

You have 3 sons, Henry, Will & Tom – tell our readers what they are up to nowadays?

Henry farms his vineyards at Marlow and Bordeaux, never happier than on a tractor. Been making wine since he was 18. A natural.  Will went over to the dark side after an unfortunate early upset with wine and now brews very good Ales in Abingdon (Loose Cannon Brewery). Tom follows my footsteps around vineyards and at events, keeping an eye on his old man and our customers.

Over in America you have partnered up with The Wall Street Journal & Zagat – how did those partnerships arise and what impact has that had on your North American Business Operations?

The WSJ came about through connections with The Sunday Times and had more or less the same effect on our affairs over there. We were introduced to Tim and Nina by a friend, they just loved the wines and we ‘clicked’. The boys and I just attended the first tastings for WSJ Wine, Zagat Wine and Laithwaite’s Wine on Fifth Avenue, New York. Went really well. We are very happy indeed with all our partnerships in the US. It’s a great market to be in and always an inspiring country to visit…with!

Would you say that you own the largest wine merchant in the world?

You strike me as a very lucky person, quite often you seem to be at the right place at the right time. How true would you say this is?

Grandmother always said I was born a lucky child. And it’s quite true.

You have had and still continue to have quite the adventure. If you could do it all over again, would you do anything different?

Where will Laithwaite’s Wine be in the next 20 years?

Predicting that is tempting Fate… with his huge great stick. I dunno, just hope there’s lots more people still enjoying our wines. I’d be happy to be one of them.