Not judging warbling contestants, you understand, but wouldn’t it inject a bit of excitement into his annual Bordeaux tasting if it were screened live on a Saturday night with a fearsome panel of experts including Robert Parker, each one more vicious and discerning than the last?  Producers would tentatively bring their lastest vintage to the table where one by one the panellists would inspect it with a critical eye, nose and palate. 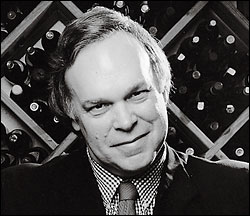 The Simon Cowell approach to wine tasting might sound a bit daft but I reckon this idea has real potential.  Every year there would be press speculation about what the judges would be wearing ‘a classic pinstripe suit – who would have guessed?’  Once the opening credits had rolled, an excitable Dermot O’Leary would introduce the judges.  Parker, of course, would sit in Cowell’s seat.  He would always get to speak last, and even though the audience would boo his occasionally biting criticism, most of us would secretly agree with him.

Of course, this is Saturday night viewing and descriptions of the wines would need to be sexed up accordingly.  The Louis Walsh-like utterance of ‘I liked it, you really made it your own’ would meet with groans from the other judges.  Then in the wake of the hilarious and often disastrous first round auditions, the best wines would be selected to attend Boot Camp.

The main focus at this stage should be to see how many producers can be reduced to tears, fluffing their words and spilling wine before storming off the stage to where Dermot is waiting with a comforting yet manly cuddle.  Reassurance that you have done your best though offers no consolation to the devastated contestants who have not done enough to get through.  Still, there’s always next year.

And finally – the live finals.  Where elegant first growths and overperforming seconds and scrappy thirds would strut their stuff for the judges, in a final bid to win the elusive X Factor title.  Parker would be accused in the press of favouring the young, opulent Cabernet based wines. The other judges would take him to task.  The press would cry ‘Fix!’, then Parker would remind us that ultimately he does not have the final say, as the most passionate among us reach for our phones.

The winner would be no great surprise, and it would emerge days later that they have been performing for years.  Parker would threaten to quit but return the following year nonetheless, while the other judges underwent a re-shuffle to ensure that the show’s format stays fresh.  And if it doesn’t, there’s always Strictly.