A recent survey by Laithwaites demonstrated that customers are turned off by the notes on the back of the wine label that advises you about how the wine tastes, Harpers reports. Evidently 55% of those surveyed said the wine descriptions were not helpful to them.  I thought this survey was quite interesting –back when I was a wine-buying novice (rather than the Shiraz-swilling expert that I am now) I often veered away from French and Italian wines because they had the least information on the bottle.  How on earth was I meant to know what it tasted like without the helpful tasting note?

A French wine bottle typically gives nothing away. You won’t find a pleasing description in English on the back of a second growth Bordeaux declaring that it tastes of raspberries and is good with chicken.  Often this is attributed to a sort of snobbery – as if the French assume you ought to already know what the wine will be like, which you would be if you were a ‘proper’ wine drinker that has done their homework.  The Italians, on the other hand, did provide a description, but quite often just didn’t bother translating it into English. When I worked in the trade I had a friend that spoke Italian and one of his hobbies was to translate the descriptions on Italian wines for our customers to read – most of them were pretty amusing but probably wouldn’t appeal to the average wine buyer, unless they were specifically looking for something ‘transcendent’ that ‘appeals to all the people in the world’ or similar, like one of the more baffling descriptions.

That’s how the Aussies and Chileans managed to edge out French wines in the first place – not only would their wines have a pleasing, pronounceable and whimsical name, they would have a lovely note on the back advising you that the wine tasted of pineapples and was great with fish. In hindsight, ‘not unlike troughing a bag of oak chips, and that’s just the aroma’ might have been a truer description, but these wines were very popular and people responded positively to the consumer-friendly information that was provided.  They could buy their own wine with confidence straight from the supermarket shelves, rather than having to deal with a stuffy wine merchant.

So have we come full circle now? Have consumers realised that tasting notes often contain great whopping massive lies, and therefore started to distrust them? Do they yearn for the French approach of providing absolutely no information at all?

I wondered whether there was a happy medium whereby just a little bit of information was imparted – nothing fancy, nothing with the word ‘transcendent’ in it and absolutely no mention of the words that the Laithwaites’ survey reported that they despised the most, like ‘old bones’ and ‘tongue spanking’ (I’d love to know what winemaker’s marketing guru decided that either of those would do anything except make consumers give the wine a wide berth – perhaps it was their last day, or they were trying to get sacked?!) All we really want to know is, what’s it like, is it oaky, what should I eat with it, and how drunk will it get me? This information, I thought, could be best imparted via a small diagram with four squares, no bullsh!t, just the facts. Like the warning labels you get on cleaning products, but a bit more classy and less frightening.  I even drew up a little sample one for the Chardonnay I had last night: 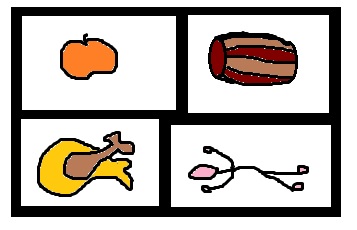 Now, in case it is as unclear to you as it was to my husband when I showed him this helpful diagram that I had laboured over in Microsoft Paint, it depicts a peach (“That’s an orange”, he said), an oak barrel (“that’s a log”) a chicken (he just shook his head), and a man flat on his back.  Now this depicts that this wine had a dominant flavour of peaches (“THAT’S NOT A PEACH!!”, he said), it is oaked, it would be good with chicken (“oh, I thought you meant it tasted of chicken”, he said; “what a numpty”, I replied) and finally, a man flat on his back depicting that at 14.5% this particular Chardonnay was an alcoholic force to be reckoned with.

Now, just to demonstrate the versatility of the system, I’ve also done one for the Riesling I had at the weekend… 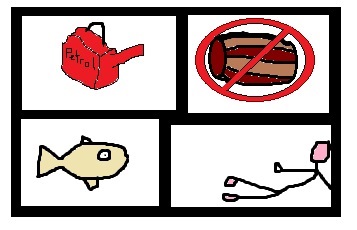 As you can see, the dominant flavour was petrol, it was unoaked, of course; fish would be a good accompaniment and finally, it would get you nowhere near as hammered as the Chardonnay.

Now I thought this was perfectly clear, uncomplicated, and gave me a rare chance to show off my MS Paint skills.  Unfortunately, my husband felt it was “a little vague”, didn’t take into consideration the “is it dry or sweet” question, and that the final pane in the diagram was “morally questionable”.

Now that’s just one (wrong) person’s opinion, so if like me you think this could please the folks who think French wines have not enough information and Australian ones just tell lies, then maybe we ought to get behind this particular solution.

Or, how about this as an option… every bottle has a considered, concise, #7WordWineReview on the back.  We’ve proved time and time again that most wines that are for daily drinking can be summed up beautifully in just 7 little words.  Maybe our favourite Twitter Hashtag is even more useful than we realised!  Wine marketing people, take note….