What would we drink if the world ran out of wine?

I was reading this article in the Telegraph earlier about how the world is facing a wine shortage after rubbish weather has battered most wine producing countrie.  Massive producers like France and Italy have been affected and it seems inevitable that prices for in-demand wines will rise.  Still, we hear things like this in the UK all the time, and it never really amounts to anything.  I heard that there would be no peas in the UK a few years ago because they were only really grown in one area and the entire harvest was wiped out by floods – but I don’t recall ever going to buy peas and coming home empty handed.  That would be disappointing enough – sausage and mash would be pointless without peas, but imagine if the worst came to the worst and the world actually ran out of wine? I love wine.  I love drinking.  So when faced with the chilling thought of the world running out of wine, my first instinct was ‘we’ve got to find something else to make wine out of.  And perhaps drink gin while we are waiting for it to mature.’  Going back to the telegraph article, a link caught my eye: “Britons go Mushroom Mad”.  Evidently shoppers spent over £365MILLION on mushrooms over the last year.  That’s a million pounds a day – on fungus.  Mushrooms are relatively easy to grow, I’ve never heard of a mushroom shortage, even during that difficult year when peas were apparently scarce, mushrooms were still in abundance, and they even grow in the wild.  Could mushrooms be the substitute for grapes that I was looking for in the unlikely event of a sort of post-wine apocalypse? 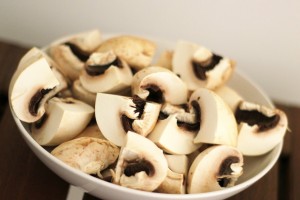 If I was going to make mushroom wine, I would have to start soon.  The world could run out of wine at any time, and I needed to have my mushroom-based replacement ready to go before the world had a chance to sober up.  I started to construct a plan.  (well, I started writing a list of the different kinds of mushroom.  So the plan is actually just a page in my notebook that says ‘chestnut’, ‘normal mushrooms’ and then a small yet accurate biro sketch of a mushroom.) But before I even had a chance to drive to Tescos to stock up, the pressure got to me, and doubts crept in.  What if mushroom wine didn’t take off?  What if I couldn’t get Parker onside?  What if the fluff I had taken to be noble rot was some sort of deadly mould?  What if, against the odds, the hardy mushroom was eventually wiped out too, and I had to find a new substitute for my substitute?  What would it be? (Oddly I thought of lentils – they grow on trees so the floods couldn’t get them!  Note to self:  I am clever.  But it’s too late now, I’ve started down the mushroom route) At this point I decided I am ill-suited to the task of finding a replacement for grapes in the event of the world running out of wine.  I have a tendency to not think my ideas through properly and I lack structure in my approach.  And that’s okay – because like the pea rumours from a few years ago turned out to be unsubstantiated, I don’t think the world will actually run out of wine.   Because if the last 12 months are anything to go by, we won’t be able to afford it anyway on account of all the additional money we’ve been spending on mushrooms….