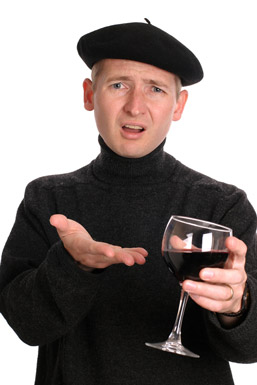 Our regular readers will be used to us bleating on about taking the stuffiness out of fine wine.  Sometimes, though, it becomes very obvious that ‘stuffiness’ and ‘snobbery’ are two very different things.  I’ll get to that in a moment, but first I want to take you back a few days to an article I read in the Daily Mail.  Now, I know what you’re thinking, but the friend that sent me the link likes to send me things that he knows will enrage me, mostly for his own amusement, and so that’s how I came to read poor Petronella Wyatt’s heartbreaking account of why it is impossible to live on her six-figure salary in London.

Poor Petronella.  There’s simply nowhere to park one’s Bentley and one’s diamond shoes are giving one a blister.  One time she even had to take the tube.  The comments below her lengthy lament indicate that while most people have reacted with the sheer venom you might expect, others think this is satire at its very finest.  I’m not too sure as I think that would imply a sense of humour that the Daily Mail just doesn’t have.

Still, I couldn’t help thinking about poor Petronella’s plight.  We’ve all felt the pinch in recent years.  I know I have.  I’ve largely sacrificed going out in favour of staying in, and slightly better wines for slightly cheaper wines.  But ultimately I’ve found that no matter how low I stoop in terms of the level of wines I consume, a little bit of inherent snobbery always seems to rear its head.  So I wondered, is my little bit of snobbery something to be ashamed of in these difficult times?  Or is something I ought to cling onto for dear life for fear of ending up drinking Carlsberg Special Brew out of a paper bag round the back of the Furniture King (like the beardy fellow I always wave at on my way home from work when I stop at the lights)?

First I’ll explain how this snobbery manifests itself, because it’s hard to believe that one’s eating and drinking standards wouldn’t slip when one is so poor that one has soldiered through the last two winters with an oil-filled portable radiator, a stack of blankets and a substantial cardigan, since the central heating packed up two years ago and the electric fire twelve months ago.  But that’s precisely what happened in my household.  So, as the chief cook and wine buyer in our house (and the chief wine consumer, let’s face it), I had to be smart.

I started planning meals and freezing leftovers.  I started venturing into the cheaper supermarkets like Aldi and Lidl.  That’s when I learned some of their best-kept secrets – like, for example, that you can buy a sub-£6 bottle of wine in either store that is not just passable, it is actually pretty nice.  And I didn’t even need to sell my diamond shoes to buy it.   And then something else happens – instead of feeling the pinch and hoping that your dinner guests don’t notice that your standards have slipped, you start to find that your friends are actually complimenting your wines and as such you have an irresistible urge to brag about your brilliant bargains and skills in identifying the best cheap wines in German supermarkets.

And so I continued to eat and drink well, despite the pinch.  I think my cooking actually improved, because I had to put more thought into it.  I discovered some really great wines at the cheaper end of the market.  I sat in my freezing house and wined and dined like a queen.  It was like a very middle class version of Bargain Hunt and I was budget shopping’s own David Dickinson.  And I loved it.

The snob in me made sure I didn’t sit around drinking Echo Falls and crying into a Pot Noodle.  But that same snob was silenced every time someone complimented one of my budget home cooked meals or accompanying budget wine choices – because I couldn’t help being pleased with myself and wanted to tell my friends how I had achieved so much for so little.  Maybe just a little snobbery has its place, just as long as you know when it is appropriate for it to rear its head, and when you ought to keep it in check and rejoice in humility.  Or maybe it is not snobbery at all and it is just a sign of either insanity or alcoholism that I would rather go freezing than drink bad wine.  To be honest, I’m not sure, I just wanted to throw it out there.

I wasn’t sure how I could help poor Petronella though.  I wonder what she’s doing now, probably drinking Cristal out of a shoe because she has sold all her fine crystal to keep the bailiffs away.  Or maybe roaming the aisles of Aldi for a lobster thermidore.   (She might be pleasantly surprised if that’s the case, Aldi is flipping brilliant.)  Maybe London isn’t for her anymore and I should offer her my spare room – she might find it a bit nippy though.