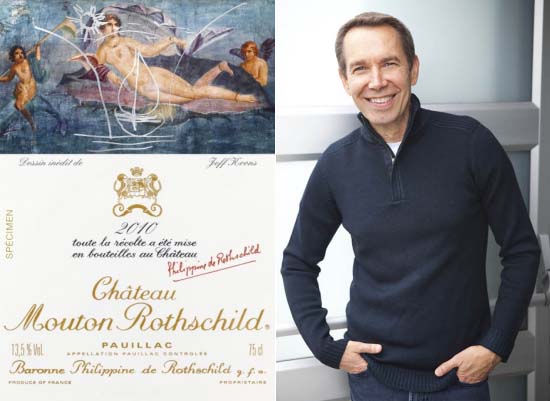 I was intrigued to read on Decanter.com  that Jeff Koons has designed the label for the 2010 vintage of Chateau Mouton Rothschild.  Joining the likes of Andy Warhol, Pablo Picasso and Lucian Freud in the honour, Koons has mesmerised and perplexed the art community in equal measure with his avant-garde sculpture pieces.

I don’t know much about art.  But I like looking at it, and I always visit the Tate Modern when I am visiting London.  Mostly because some of the work is quite amusing, and I really enjoy that sense of ‘what on earth is that doing in a gallery?’ when I am looking at a pickled cow or a giant ashtray full of fag butts or a great big circle made of dead flies (yes, all Damien Hirst).  So perhaps I don’t understand art very well, given that my reasons for enjoying it are largely based on hilarity rather than being challenged or impressed by it.

Anyway, having learned a bit more online about Koons’ sculptures, which mostly look like things you would give to a child at a party in order to stop them from crying, and having viewed the slightly questionable doodle that he provided for Mouton’s 2010 vintage, I wondered whether there was an alternative source of wine art that would impress me more.  It wouldn’t be hard, I thought.

I’ve dabbled in cork art once before – when I was teaching my wine education class I asked the students if they could bring me any corks from bottles they had opened, so that I could make a sculpture. Six weeks and two bin bags full of Blossom Hill corks later, I thought to myself ‘goodness me, these people drink a lot of bad wine’ and decided not to pursue my artistic dreams any further.

I do save corks usually, but most of the wine I drink is screwcap, and screwcaps seemed an unappealing medium for my art. I contemplated making wine spillages into art, after all I do seem to spill a lot of wine around the house. I ran this idea past my husband and it met with some resistance. He went on to point out that if cat vomit was art, our stairs would win the Turner Prize, at which point I took the hint and retreated to the kitchen to retrieve some cleaning products.

But then I had a brainwave. What if I could somehow capture life through a wine bottle? Surely this would have some deep symbolic significance? I swiftly popped to the shop for a bottle of white, drank half of it, and set the other half to work as my muse for the evening. I propped the bottle up on a footstool and peered through it. Now I was hoping to do either a watercolour or some sort of glorious oil painting on canvas but as resources were limited (I try to keep my art supply budget to a minimum), I settled for my laptop and Microsoft Paint.

What I actually created was a triptych of scenes from my living room – in the first, the bottle was half-drunk and upright, in the second it was empty, and I managed to capture a glorious moment when my cat walked past, and in the third, I captured the same scene, minus the cat, but with the bottle on its side.  Feeling pretty impressed by my edgy portrayal of modern life (albeit life in my living room) and social commentary on the perils of drinking alone, I wondered if there might be a chance that I would be invited to design the label for the 2011 vintage of Mouton Rothschild.  After all, it was a pretty average vintage, surely a pretty average artist would be the obvious choice?

Things went a bit wrong at this point, as I inadvertently deleted my masterpiece instead of saving it.  Perhaps if I had not drunk so much wine I would have been better equipped to operate a computer correctly, and my work would have been saved.  But would I have achieved such levels of artistic excellent were it not for the emptying of the wine bottle, the very muse that gave my triptych such depth and raw energy?

Or maybe on some level, I had deleted it on purpose, because the grim reality that it portrayed was not something I wanted to share with the art community.  Who knows.  I don’t think my artistic career is over though, perhaps Microsoft Paint is just too limiting for an artist with my raw creativity.  Maybe I could do some performance art with those bin bags full of Blossom Hill corks wherein I could paint myself gold and throw them at people in the street.  Or maybe some sort of interpretive dance relating to different vine training methods.  Or I could paint myself gold and people could throw money at me while I drink 2010 Mouton Rothschild… so many ideas.  Watch this space, art lovers…