Last week I was shopping during my lunch hour when I saw something that I found remarkable in the window of a branch of Vision Express.  I have since mentioned it to other people that seemed to find it comparatively underwhelming, but perhaps I had exaggerated just how exciting the thing I was about to tell them was before I actually told them what it was, which seems to be a recurring problem for me.  So without further ado, I’ll tell you what I saw, and you can make your own mind up.

“2 for 1 on the Designer Heston Glasses Collection”.

Yes, that’s right – it is a promotion on acclaimed chef Heston Blumenthal’s range of designer eyewear.  Now, be honest, does this not strike you as a little unusual?  If it doesn’t, fair play to you, perhaps you are more accepting of things that seem to me to be not normal at all.  But if I were to explain why I think it is a little odd, I would have to say that it is odd because Heston Blumenthal is quite well known in the field of cookery, rather than for his skills in eyewear design.  I mean, he wears glasses – but on this basis I would be similarly well qualified, and so would most of the over sixty population.  I wondered whether it is because Heston is considered to be something of a style icon – but again, I’m not really sure that he is – he seems to spend rather a lot of time in the kitchen wearing chef’s whites, and even when he isn’t, I can’t remember when I’ve thought ‘goodness me, Heston Blumenthal is a fashionable guy.’  Nor have I thought he is an unfashionable bloke, to be fair, but if I had at least formed an opinion, good or bad, regarding his sense of style, then at least he would be on my radar rather than just a man who wears clothes that is good at cooking.  So, short of his glasses being smeared in snail porridge, I couldn’t quite understand why Heston Blumenthal was their celebrity of choice. 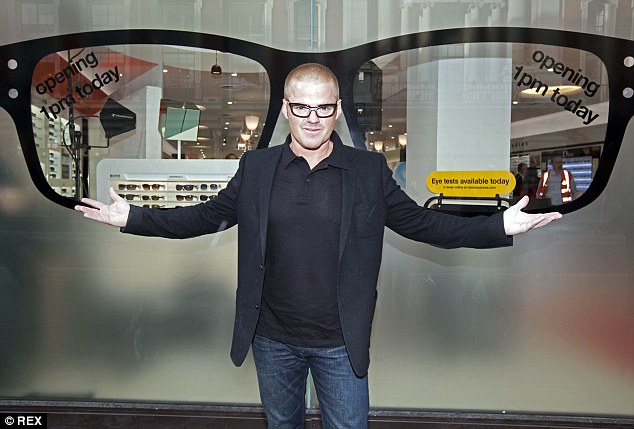 I wanted to find out more, so I went onto Vision Express’s website to see if I could gain some insight into what I felt was a bold, if not controversial, decision.  Now, if you follow the link, you’ll see my absolute favourite sentence about the Heston Blumenthal range right in the middle, and here it is:

“We have worked closely with Heston Blumenthal to create his iconic range. His glasses feature all the marks of quality and distinctive style you would expect from the man noted for his innovation and diversity in the kitchen.”

Again, is it just me?  Should we expect Heston to be good at eyewear design on account of his phenomenal gastronomic abilities, or am I right to suggest that one does not necessarily follow from the other?  I would say that the two things are quite different and unrelated, and I would forgive Heston for saying ‘Thanks anyway, Vision Express, I’m flattered, but I’m actually a chef.’

As I didn’t go into the store to peruse the collection, and there is only one picture of Heston wearing glasses on the website, it would probably be unfair of me to continue any further down this road, except to say that the one picture would suggest to me that if you want to look a bit like Heston Blumenthal, this is definitely the range of eyewear you should go for.  And its 2 for 1, for heaven’s sake, so you should probably get cracking.

But on the other hand…

Rather than simply lamenting that they couldn’t think of a single other celebrity that is known for wearing glasses, Vision Express have launched what appears to be a hugely successful campaign around this offer.  And some of the people I mentioned this to did comment ‘well, he’s good at making food look nice so why shouldn’t he design glasses?’  And it is clear from the website that he wasn’t just taken to a studio and given a packet of crayons, he’s worked with a team of people whose job it is to design eyewear.  And finally, he’s lent his incredibly popular face and persona to the campaign, which caused me to stop outside a branch of Vision Express I have never even noticed was there before.  In an age where any member of a girl band can call herself a shoe designer, and Justin Bieber can be trusted to assign his name to women’s perfumes (although I think they really did sit him down with a packet of crayons for that one, if only to keep him out of the way), shouldn’t the wine industry be jumping on the bandwagon and signing up stars with only the most tenuous links to wine? 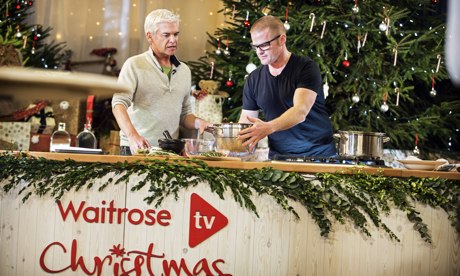 To some extent, I think this is already happening – Waitrose have enlisted presenter Phillip Schofield to recommend wines for them on their online video channel and twitter account https://twitter.com/schofeonwine.  And it seems over 30,000 of us are already following him – did any of us know that he was a wine buff before we started following him?  I certainly didn’t.  But there he is – clean cut, smiley, still oddly handsome despite the fact that I remember him presenting children’s TV 20 years ago assisted by Gordon the Gopher; a perfect ambassador for the Waitrose brand.  Schofield, that is, not Gordon the Gopher.

And then it dawned on me.  The perfect ambassador for your brand is probably not going to be the person that comes to mind first.  If we had to come up with a list of names of celebrities that like wine, it would probably read as a who’s who of catastrophic drinking problems followed by rehab.  Enjoying some wine banter with clean cut Phillip is a lot more appealing than the possible alternatives.  His insights and occasional wisecracks are pretty insightful.  And it sort of made me start fancying him a bit more, but that’s another story.

I haven’t been fair to Vision Express.  Just like Waitrose made a clever move with Phillip Schofield, they hadn’t merely recruited any old celebrity that is short sighted, that would have been, well, short sighted.  Heston’s a popular chap.  His TV programmes seem to be cropping up on all sorts of digital channels.  People like him.  I like him.  Now, while I’m not too convinced by the alleged interpretation of ‘culinary themes’ in the Blumenthal range, I couldn’t help wanting to find out more.

And why on earth shouldn’t he design glasses?  It makes a change from Snail Porridge, after all.