Here at 12×75.com we like to ponder wine dilemmas of epic, and in this case, Biblical, proportions.  In the days of the new testament, there wouldn’t have been a great deal of choice as to what wine Jesus might have selected when he found his glass dry at the wedding at Cana. I hardly think his guests would have turned their nose up at a modestly priced Chilean Cabernet, if such a thing had existed in Biblical times.  But flash forward to 2011, imagine it is Wills and Kate’s wedding reception and the wine has mysteriously run out.  With all the choice in the market these days, how would Jesus ensure the guests were sufficiently impressed not just by the miracle but by his exquisite taste?

You might expect him to select something with a slightly holy-sounding name – Chateau Angelus springs to mind.  And as one of Robert Parker’s ‘Magical 20’ wines, it has the added allure of being recognised as a wine that punches above its classification – a nice way to show one’s guests that you have really thought about your choice of wine for the evening.  On that note, why not just have a mixed case from the Magical 20?  It would certainly give the guests something to talk about.  Although, they do vary in price quite a bit so you might find this would lead to bickering and one-upmanship between the top table who got La Fleur Petrus and Wills’ friends from uni who scored Leoville Las Cases.  And isn’t one of the commandments, thou shalt not covet thy neighbour’s wine?  (it’s been a few years since Sunday school but I’m almost certain that’s right.)

So, we finally decided on Pontet-Canet.  As a humble fifth growth that is known to outperform wines ranked much higher vintage upon vintage, it would be an excellent choice.  And it would demonstrate that Jesus not only knew his Bordeaux but also recognised that guests who had already polished off Wills and Kate’s first choice wine while they were smooching on the balcony probably didn’t really deserve a First Growth in any case.

Of course, this could lead to all sorts of opportunities for Pontet-Canet.  With the Holy as well as the Royal stamp of approval, it could be the first wine in history to rise from Fifth to First Growth, smirking at the 1855 classification and smugly acknowledging that even though it now ranks alongside Lafite, Mouton-Rothschild and Haut-Brion, that it is considered slightly superior to them.  How would Guy Tesseron market the new vintage of Pontet-Canet?

Well, I don’t think he would need to!  The truth is, Tesseron does not need any assistance marketing his wine.  Thanks to a move to biodynamic farming in 2004, Pontet-Canet went back to its roots and the vintages that followed showed the wine to be one of the Medoc’s finest, with the 2008 being rated by Parker at 96-98 points and the 2009, 97-100.  High praise indeed, even without divine intervention! 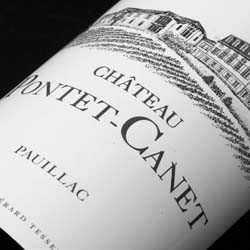 We’d love to know what wine you think Jesus would turn the water into today – would he stick to a sensible Claret or jump on the Burgundy bandwagon or controversially plump for an aggressive Californian Zinfandel?  Would he salute Jancis Robinson’s tireless efforts at promoting the grape and select a mature Riesling from Alsace?  Let us know what you think!