Benjamin many thanks for taking the time to talk to us here @12×75 and congratulations on the success of The Billionaire’s Vinegar. How did you first hear of the events that you ended up writing about?

Thank you. I first read about them in Jancis Robinson’s memoir, Tasting Pleasure. 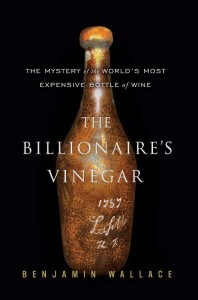 You had already made a name for yourself as a journalist – what was it about this story that compelled you to become a first-time author?

Back in 2000, as a food-interested magazine writer frustrated by the offerings in the “wine books” section in bookstores (which are typically reference books or didactic introductions to wine), I decided I wanted to write a narrative non-fiction book about wine, and I got it in my head to try to tell the story of a single bottle of wine, and through its story to explore the personalities, history, science, and other aspects of the wine world. My next challenge was to find a particularly interesting bottle of wine to focus on, and Jancis Robinson’s book mentioned this 1787 Lafite. It seemed to offer many promising elements for a great, true story: a dramatic auction and record-setting price; a very old bottle from the premier chateau in Bordeaux; an intriguing provenance (Thomas Jefferson’s lost wine!), the mysterious Hardy Rodenstock, the debonair Michael Broadbent, and the subculture of obsessive collectors. Over the next five years I conducted preliminary interviews (with Kip Forbes, who bought the record-setting bottle, and with Michael Broadbent) and research, and it became clear that the publicly known facts were just the tip of an iceberg.

After the publication of your book, you went to find Hardy Rodenstock. Have you had any success since then at tracking him down?

The challenge has never been tracking him down–I know where he lives; we’ve exchanged faxes–but rather getting him to agree to meet with me. I doubt he ever will, but the German-language edition is going to be published in the next month or two, so perhaps that will flush him out.

I wonder if he has read the book yet – do you think his curiosity will have got the better of him?

When the book was first pubilshed, a reporter from Bloomberg got him on the phone and asked him what he thought of the book. He said it was a “marchenbuch”–a fairy tale–but then admitted he hadn’t read it. I have no idea whether he has read it since then; if he hasn’t, perhaps the German edition will prompt him to. 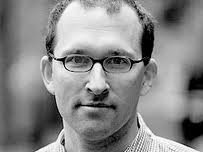 One of the things critics have commented on is that ‘The Billionaire’s Vinegar’ is enjoyable to a much wider audience than just fine wine buffs – were you writing with a particular audience in mind?

I was very deliberately writing with two separate audiences in mind. I wanted it to read freshly and credibly to wine buffs, but above all I wanted it to read accessibly and informatively to a general reader: someone who didn’t necessarily know they wanted to learn about wine but would be sucked in by a great true story.

In your research for the book, you must have come across access to many people with great wine collections. Were you lucky enough to try any special bottles and if so, which ones?

Among the more memorable: A bottle of 1988 Henri Jayer Echezaux, drunk with an enormous pork chop and perfectly crisp potatoes roesti at lunch at Gasthaus zum Gupf in Switzerland, with the great DRC collector Wolfgang Grunewald, and a 1996 Chateau Musar, to wash down some roast grouse, with Michael Broadbent at his men’s club, Brooks, in London.

Owing to Michael Broadbent’s ‘successful’ libel case against Random House, the book was withdrawn from sale in the UK. Were you affected by the controversy?

I might take issue with the description of his libel case as “successful”: my publisher settled with him, as corporations do all the time, as a business decision aimed at minimizing its legal costs and risk; there was no judicial determination as to the merits of his case. That said, it was annoying, particularly because Broadbent accused the book of saying something it doesn’t actually say; I have never believed that he was willfully complicit in the Jefferson bottles fraud. But I wasn’t affected significantly. The book continues to be sold everywhere other than the UK.

Some of our most experienced and well-regarded experts like Jancis Robinson and Robert Parker were mesmerised by the wines at Rodenstock’s tastings – do you believe that they were drinking inferior wine?

We’ll never know for sure, but it seems likely that at least some of the wines they were drinking were not what they seemed. Which just speaks to the fallibility of even the greatest palates.

Not many of us have a Kip Forbes style budget when it comes to wine, but if money were no object, what wine would you most like to try? 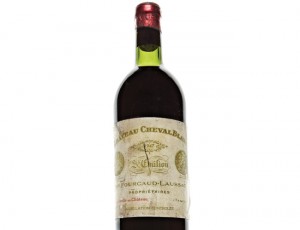 I have tasted some very expensive wines, including the 1947 Cheval Blanc and the 1921 Chateau Yquem, and the big lesson for me is that none of these cult wines can ever live up to the sort of monumental hype that surrounds them. If money were no object, I would spend it on assembling a well-stocked working cellar with lots of everyday wines and a nice selection of excellent but non-trophy wines, including relatively reasonably priced mature Bordeaux from chateaux such as Gruaud Larose and Leoville Barton.

Given a series of fake wines showing up at auctions recently , do you think the domaines are really pulling their weight in helping solve this issue and what steps realistically can be taken to combat fake wines popping up?

I don’t blame the domaines so much as the auction houses and retailers; that’s the point in the supply chain where fake wine gets laundered. But anyone playing the game of buying overpriced trophy wines either knows the risks, and accepts them, or doesn’t know them, and doesn’t really care.

You are a very prominent journalist and author, other than 12×75.com, tell our readers about some of your other favourite wine publications/sites/blogs?

And the film ‘The Billionaire’s Vinegar’, directed by David Koepp, is set for release in 2012 –rumoured to be ‘loosely based’ on the book. What can we expect from the film?

I can tell you that a script has been written by Derek Haas and Michael Brandt–the screenwriters behind 3:10 to Yuma, Wanted, 2 Fast 2 Furious, and the forthcoming Matarese Circle–and also that one of the producers who optioned the story is the actor Will Smith. Other than that, I’m in the dark as to the producers’ exact plans and schedule.

So many people loved your book – in light of so many events recently, would you ever consider doing a follow up, perhaps A Trillionaire’s Vinegar?

I like your suggested title, but I probably wouldn’t write another book on this topic. I’d rather write about something totally different. But If a new edition is published in connection with the movie, I will almost certainly update the epilogue to incorporate the last couple years’ worth of developments.

And finally, what’s next for Benjamin Wallace?

I’m keeping busy writing for New York Magazine and Wired Magazine. I assume that at some point I’ll find myself working on another story that seem ripe for longer treatment, and then I’ll write another book!

Benjamin, many thanks for speaking to us today, and we wish you all the best with your current projects.

12×75.com would like to thank Benjamin for this interview. Benjamin Wallace is a journalist and author of ‘The Billionaire’s Vinegar’who lives in Brooklyn, New York. The Columbia Journalism Review named him one of “ten young writers on the rise” in 2002.