Reflections on the point of no return

There’s nothing worse than being horribly drunk in public.  The aftermath of a good session can be extremely traumatic for even the most seasoned consumers of wine.  First, there’s the nagging doubt that you might have done something a bit worse than the things that you can remember doing.  Then, there’s the shame that accompanies the things you remember doing.  Then there’s the knowledge that from now on when you see any of the people who were present while you were over-indulging, their opinion of you will be forever tainted by last night’s encounter.

However much we enjoy wine, none of us want to be that guy.  So what steps can we take to ensure that next time, we don’t go past that critical point of no return, the point at which a civilised conversation with Michael Broadbent becomes an embarrassing scenario wherein after demonstrating how you can interpret different wine grapes through dance, you excuse yourself from Broadbent by uttering ‘Dear God, I think I’m in the matrix’, before staggering off for a tactical chunder?

It’s vital that you can recognise the point of no return.  Because everything you say up until this point, no matter how clever and insightful it was, will be eclipsed by the unforgivable jibberish that you say on the other side of it.  Thoughtful comments about the ever-changing Chinese market for Bordeaux?  Forgotten.  Telling Robert Parker you’ve always admired his physique?  Remembered, always, always remembered.

However much we’d like to disassociate wine from drunkenness, unfortunately most of us have been in this position at some stage, and so whether we like it or not, it deserves some attention.  So us helpful, socially responsible and worldly consumers of wine at 12×75.com would like to offer you ten ways to ensure you don’t go past the point of no return, particularly in the company of the wine industry elite. 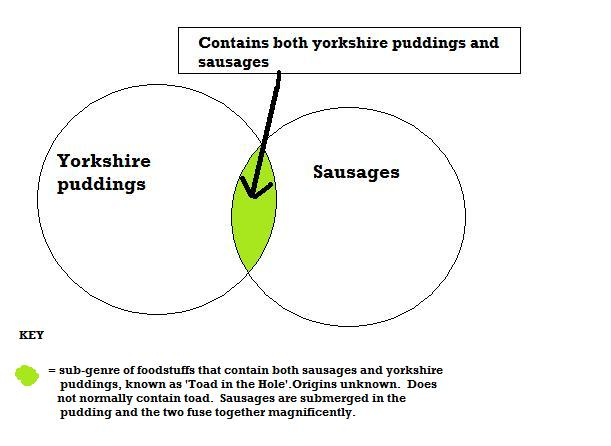 Figure 1: Venn diagram outlining basic food groups.  Recreated in MS Paint since original napkin based sketch was incoherent.  I suspect I was trying to explain toad in the hole to a foreign person.

Now, there will be times when with the best will in the world, you’ll find that you are already past the point of no return.  If this happens, don’t panic.  Restraint comes with age and experience – making a terrible idiot of yourself on more than one occasion is the best possible deterrent for reaching the point of no return, so just ride it out, and next time, you’ll see it coming.