I promised Mrs 12×75 that when our son was born, I would dedicate as much of my time to him as I could. That of course meant making some sacrifices, one of which was sadly writing this blog. However, the last year has given me a great deal of time to keep trying new wines and of course old favourites. It’s also given me an opportunity to read a lot of the wine news and blogs.

In the last 12 months, I managed to actually get to have a clear out too and sort through old bits of paperwork. I used a company called Total Shred who specialise in on site paper shredding. They showed up and shredded all my paper on site in their shredding truck – how cool!! In a rush to leave, their driver George left his copy of the Metro Newspaper. And as I leafed through it, I was SHOCKED to see an article that talked about a new wine gizmo to hit the market. Now at this point, I’m sure you will have of course seen the  Wine Condoms. But without even having to get too graphic, let’s just back up for a second… Below is a video explaining exactly what it is and how to use them:

It started off as a Kickstarter project by Mitchell Straham and reached great success by smashing it’s goal of $7,500 and settling on a final total of $9,285. Since then, they ramped up the project and now sell the Wine Condoms through Amazon.

If you can get past the whole condom thing, then yeah – in many ways it’s actually not that stupid an idea. Mitch makes a valid point in an interview that the problem with bottle stoppers is that they add to the length of the bottle, making them even harder to refrigerate. True. 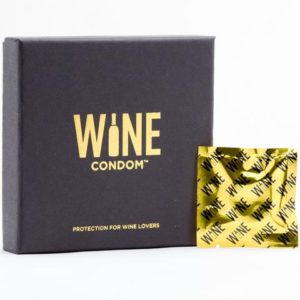 However, on the heels of a few years of weird and wonderful bottle stoppers, I was hoping that someone would perhaps think of something that was more unusual and and niftier than the Coravin. That said, as much as I can see the Wine Condoms being a practical application and perhaps even working, for very obvious reason it’s not for me. In all honesty from a marketing point of view they should have gone with perhaps a totally different name. The Wine Balloon perhaps…. One thing is for sure, whether it’s because of all the Celebs that like it, it works or it’s a novelty, they seem to be selling like hot cakes on Amazon.

We here at 12×75 we will of course be keeping an eye on their progress and reporting back.

It did get me thinking though, if Coravin and Mitch over at Wine Condoms partnered up, maybe they could come out with a new device altogether? The Coravindoms!!!!