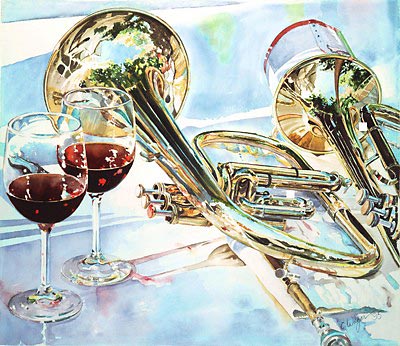 I use the LinkedIn website quite a lot to network with people – both in my day job in IT and my sideline as a wine blogger.  The best way to get involved is to join groups – I’ve joined this brilliant one called ‘Computing and Philosophy’ that is full of people much smarter than me asking the kind of ground breaking questions that if answered successfully might cause the universe to implode.  Mostly I just look at the comments people have writtten and think, uh, shouldn’t you get back to work?  (Yes, I know)  But the thing I really want to talk about came from a much interesting group that I’ve joined – The ‘Wine writers, Bloggers, Jobs & Networking’ Group and that’s where I found out about this brilliant blog, ‘Joy’s Joy of wine’.  Now I don’t know whether Joy is solely joyous about wine or whether there are also blogs called ‘Joy’s joy of biscuits’ or ‘Joy’s joy of cuttlefish’ but nonetheless, I was delighted to stumble across Joy’s excellent blog and in particular this piece about wine and music.  Joy tells us that studies show that the music playing in the background in a shop can actually affect the wine that we select.  But what interested me most of all was this extract from a study about optimising the pairing of wine and music…

‘Clark Smith, winemaker at Diamond Ridge Vineyards, has been testing these theories and drawing some interesting conclusions. According to Smith, “Red wines need either minor key or they need music that has negative emotion. They don’t like happy music. With expensive reds, don’t play music that makes you giggle.  Pinots like sexy music. Cabernets like angry music. It’s very hard to find a piece of music that’s good for both Pinot and Cabernet.”

Surely there is something very, very bold and engaging about this statement?  I was immediately intrigued, and certainly up for the challenge of finding a wine that would upset or anger neither my Cabernet nor my Pinot Noir while maintaining my general demeanor of being neither too happy nor too sad.  After all, I didn’t want my enjoyment of the wine to be muted by having to endure a rubbish piece of music.  So on my way home, I bought a £6 Cabernet Sauvignon and a £7 Pinot Noir, and prepared for a night of sombre, humourless music, and difficult-to-please grape varieties, to see if Smith’s theory was correct.

First stop – the angriest music I could find on my iPod.  I selected ‘Duality’ by Slipknot and settled down to taste the two wines, starting with the gentler Pinot.  Its flavours were rather muted, I noted.  Perhaps it did not want to wake up in the presence of such an angry racket?  The Cabernet, by comparison, tasted serene.  But somehow a relatively elegant red wine didn’t seem at home with industrial heavy metal.  I moved on.  Failing to find any music on my iPod that could even remotely be described as ‘Sexy’ I requested some help on Facebook and a friend came up with ‘Dirrty’ by Christina Aguilera.  I tasted the two wines again.  The Pinot seemed more at home this time.  It had definitely woken up and even showed some of the farmyard character that a really good mature Pinot should have, even though it was a cheap bottle.  Could it be that it was responding to its favourite type of music?  The Cabernet, again, tasted serene, as if it was above this sort of ridiculous gyrating.

My third choice of music was ‘happy’ and I went for Rizzle Kicks’ ‘Mama do the Hump’… it always seems to raise a smile in my Zumba class.  The Pinot Noir tasted exactly the same as before – in fact it was rather nice.  And the Cabernet still tasted very graceful.  I didn’t feel that either wine required a more serious accompaniment, nor that either one objected to the relatively upbeat music.

Then, since this was a controlled experiment, I brought out my ‘control’ wine, a Pinot Grigio from Washington State that I thought looked interesting.  I tasted it will all three songs.  And finally, I randomly selected a ‘control’ song, which was Tom Petty’s ‘American Girl’ and tasted all three wines with it.  It has to be said, at this point I was really quite smashed and had somewhat forgotten what experiment I was actually doing.

I reflected on my experiment the following morning, having made my husband endure it as well.  It didn’t really seem like there was any link between the wine and the music.  The Cabernet certainly didn’t seem to prefer angry music, and it seemed the only reason the Pinot Noir had come to life when presented with the sultry sound of Christina Aguilera was that the bottle had been open for a little while and the wine was naturally beginning to aerate.  Perhaps I ought to have purchased more serious wines or chosen my music with more care – would I have had a more accurate result if I had matched a second growth with a Wagnerian opera?

No, I don’t think so.  In fact this entire experiment was complete nonsense and I knew it was all along – the very statement that it is very difficult to find a piece of music that will provide a suitable accompaniment to both a Cabernet and a Pinot (that is both angry enough for the Cabernet and sufficiently sexy for the Pinot) was just so ridiculous that I felt I had to put it to the test.  You should, of course, listen to whatever you like when you are enjoying your nice bottle of red, and take statements like the one above for the pretentious drivel that they are.  Nonetheless, I highly recommend the experiment as it was probably the most fun night in I’ve had in months….