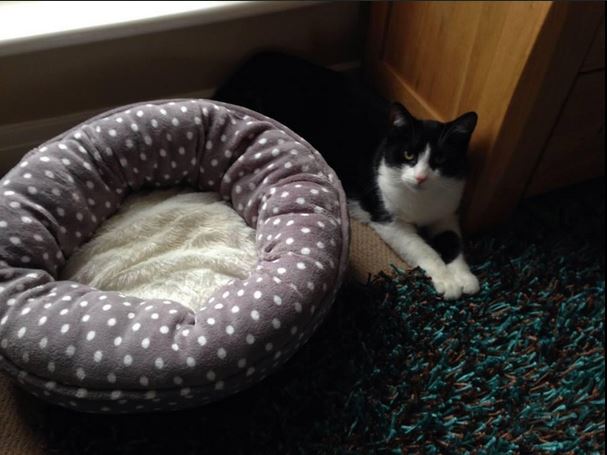 We got a new kitten recently so instead of frequenting the local hotspots and wining and dining in all the most sophisticated places, I’ve been sitting in with a sub £7 glass of Chardonnay trying to convince 10 week old Florence not to eat cat litter.  To be honest, I wouldn’t exactly be hitting the clubs anyway – our village has a Co-op AND a BYOB Indian restaurant which I’m sure you’ll agree is more than enough entertainment for two people in their late thirties with no children and a rather fantastic trio of felines.

Last week my friend came over to spend the evening with me.  She loves cats too and as we spent the evening watching Florence chase things and antagonise the other two much older cats, I couldn’t help realising that we assign human characteristics to them in a rather embarrassing way.  To demonstrate what I mean, I suggest you brace yourself for an excerpt from our conversation.

“Look, Florence is carrying a toy in her mouth.  Aww, isn’t she precious.  Where’s Nadia?”

“I let her out.  She’s had a touch of existentialist angst since we got the new kitten, and likes to sit in the garden in the evenings.”

[At this point my friend, who also has a kitten at home and an older cat too, nodded in a sympathetic and knowing manner.]

“How’s Dennis getting on with her?”

[At this point I nuzzled the enormous tabby on the back of the couch, who responded with a deep sigh and stretched out his paws.]

I won’t go on, as I fear our readership is probably not laughing with me anymore.  In fact, if they are laughing at all, it is probably in that slightly fake laugh that you tend to reserve for very uncomfortable situations.  Anyway.  Florence went to her room to eat cat litter, Nadia remained in the garden contemplating the works of Simone de Beauvoir, and Mr Grizzly Grump drifted back to sleep and the conversation turned to wine.

That’s when I noticed that my habit of assigning human characteristics to my cats unfortunately doesn’t stop there.  I described a wine, in a rather patronising manner, as charming. When I thought about it, most people that taste wine regularly are guilty of doing this sometimes.  But it’s actually a lot less cringeworthy than the feline chit chat.  Seductive.  Alluring.  Cheeky.  Bold.  Aggressive.  We hear all of these words attributed to wine all the time, and don’t even bat an eyelid.

I wondered, the morning after my friend’s visit, should we perhaps take this a step further?  Could we use our tasting notes to push the boundaries of wine tasting and really get to grips with the personality of the wine?  I couldn’t quite explain what I meant so I decided not to waste any more time and to get on with tasting.  After all it was practically midday, and the New Zealand Pinot Noir that was left over from our evening wasn’t going to drink itself.

I wrote a tasting note, but really tried to focus on the personality of the wine, as you can see:

“This wine greets you with a slightly uncertain handshake.  When you first meet it, it is clearly nervous.  It giggles and tells inappropriate jokes.  When its true character starts to emerge you realise that it is actually a pretty nice guy, but has lost some of its confidence since it’s wife ran off with that cheeky Merlot.”

“The Chardonnay stomps into the room and doesn’t shake your hand.  It gets your attention though.  You can’t help thinking you’ve seen it somewhere before.  Later on you find out that it auditioned for ‘The X Factor’ and was described by Louis Walsh as being “a bit cabaret”.  You can’t help thinking it might have got through if only it had showed its softer Fernão Pires side.  You hope that the rejection hasn’t put it off performing in future, because actually it has some raw talent.”

It has to be said, I was really enjoying getting to know my wines like this.  Later on I finished off the Fernão Pires blend and couldn’t help thinking with every sip “you don’t need that show – you are talented and special and you can make it on your own.”  I don’t know if this will take off, but I highly recommend getting to know your wines this way.

My experiment didn’t go any further though, as I became distracted when I noticed that having relocated all of her food into her water, Florence had run into Mr Grizzly Grump in the hallway and he had her in a headlock.  Nadia had returned from her stroll in the garden to find I had locked the cat flap to stop Florence escaping.  She was pretty mad.  I had to get back to counselling my cats.

Next time you taste a wine, don’t just write a tasting note – assign a personality to it.  I know it sounds stupid, but it was so much nicer to empathise with my wine that I think I’m going to do it from now on.  And the next time you see someone in a wine bar whispering “Don’t worry, he’s not even half the man you are, she’ll be back” into a glass of red, you’ll know that it’s not just the drink talking.