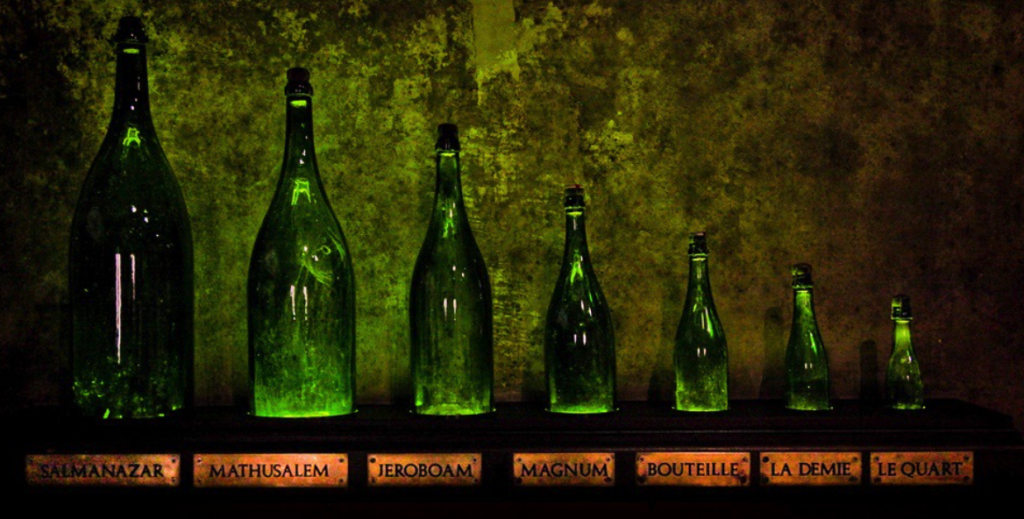 Start quoting the names by which specific sizes of champagne bottles are known and watch the listener’s eyes glaze over. Understandable perhaps, given that the names, which are often difficult to pronounce, find their roots in the dim and distant biblical past.

To be honest, and despite wine consumption, including champagne, rising considerably in recent decades, most people wouldn’t recognise those naming conventions today and it is questionable whether many of them were ever in common usage. They do, however, still come in handy for TV and pub quizzes and there isn’t a Chaser worth their salt who can’t immediately tell you how much champagne is contained within a certain type of bottle.

Why are Champagne Bottles Named After Characters in the Bible?

The truth is, no one really knows why champagne bottles are named after people in the Old Testament, although there are some interesting theories around. There is evidence to suggest that Jeroboam was the first biblical king to have his name associated with a bottle.

In a work of 1806, Sir Walter Scott, the author of Ivanhoe, mentions a brandy Jeroboam, a much earlier reference than the one in the 1899-1901 edition of the Oxford English Dictionary which refers to, “a very large bottle of wine.”

Well, the bible describes him as, “a mighty man of valour who made Israel sin” and there can be no doubt that the bottle that bears his name would supply a mighty draft of champagne, after which, who knows what might occur? Rupert Millar and Philippe Margot are among a number of wine experts who reject this theory.

There is a word Jorum, referred to as early as 1730 and used to describe a large bowl or drinking vessel. Jorum is also mentioned in the Bible as someone given large drinking vessels by his father Filo, which he took to King David. Perhaps that is why it was adopted as the name of a large bottle.

One thing the experts do seem to agree on is that once one biblical king’s name was used to denote a particular size of bottle, others followed, probably named by the same individual with their tongue firmly in their cheek. The magnum predates this practice and was mentioned by Robert Burns in 1788. It comes from the Latin term, magnum bonum – a large good thing. Today, the Magnum is the only one out of them all that can be used legally on a champagne bottle. Let us take a look at the different sizes of champagne bottle.

Self-explanatory and too mundane to name after a biblical King. Contains 0.2 litres. A nice gesture gift but not much use for anything else.

Again, nothing remarkable here, just a half bottle of champagne containing 0.375 litres. Might come in handy in a restaurant for those who to drink but don’t want to splash out on a full bottle.

What most of us are accustomed to and 0.75litre bottles are standard fare for weddings and other milestone celebrations.

Here we go with the interesting names. 1.5 litres and equal to 2 standard bottles. The favoured prize of Formula One racing drivers, one might think. Though after shaking and holding it aloft they usually waste half a bottle on opening.

This contains 3 litres or 4 bottles. Named after the King of Israel in 753BC.

This King of Judah from 933 BC and a son of King Solomon. The word means the clan is enlarged. A bottle of this size holds 4.5 litres, equivalent to 6 bottles.

Methuselah is a word that, wine bottles aside, has become associated with people attaining great age like Methuselah the biblical patriarch who died at the ripe old age of 969 years. A Methuselah Champagne bottle holds 6 litres or 8 bottles, a size that would be difficult to handle.

Holds 9 litres of champagne or 12 standard bottles. Salmanazar was an Assyrian King who ruled in 1250BC.

Another more recognisable name, this time stemming from the New Testament. Balthazar, so the legend goes, was one of the three wise men who visited the infant Jesus in the stable. The name means king of treasures and a bottle of this size, holding 12 litres of champagne or 16 bottles would be a treasure indeed.

The name Nebuchadnezzar is derived from nabu-kudurri-usur, which means protect the boundary. Old Nebuchadnezzar II, King of the Chaldean Empire in 604BC, did anything but that. He was too busy drinking wine in silver and gold vessels taken from the temple to notice the invading Persians. The Nebuchadnezzar bottle contains 15 litres or 20 bottles. The term was certainly in use in 1916 because it is mentioned by Aldous Huxley in a letter.

18 litres or 24 bottles are contained in a Solomon. Solomon, noted for his great wisdom, succeeded his father David to the throne of Israel in 970BC.

A Primat contains 27 litres, the equivalent of 36 bottles of champagne. In Latin, it means of first-rank and whilst not biblical in origin there is a link to ecclesiastical primacy.

A Melchizedek is the biggest bottle of all, 30 litres or 40 bottles. Melchizedek was the King of Salem and priest of El Elyon mentioned in the book of Genesis. You would need Samson, another biblical figure, to pour a couple of glasses from this bottle.

There is also a wine bottle called a Melchior containing 18 litres or 24 bottles and named after another of the three wise men. However, it is not one of the recognised bottle sizes for champagne.

Champagne bottles, whatever their size, have had the same design for almost 200 years. Made of glass, by a manufacturing process these days, they are medium or dark green in colour with gently sloping shoulders. At the base of the bottle is what is called a punt, a throwback to the days when bottles were blown. The punt gives the bottle greater stability and increases its strength, which is important for the bottle to be able to withstand the high-pressure created by the secondary fermentation of the champagne it contains. The pressure in a champagne bottle is 90lbs per square inch which is immense. In bygone days champagne-makers would often find bottles had popped their corks. The more superstitious among them believed this to be the work of evil spirits which led to champagne being labelled The Devil’s Wine. As a safety measure, workers donned metal helmets to stop themselves being injured by flying corks.

A Word About Champagne Corks

Champagne corks are knows as agglomerate corks. They are made from three pieces: two discs of cork followed by a third piece which is a mixture of ground cork and adhesive. Before a cork is inserted into the bottle it is twice the size of the opening it is going to plug. Once in place, overtime, the cork will take on the mushroom shape that anyone who has opened a bottle of champagne will be familiar with. Champagne manufacturers were keen to solve the problem of wastage caused by popping corks. Clearly, the method of trying to keep he cork on place with oil cloth and wax wasn’t proving particularly effective. So, in 1844, Adolph Jaquesson invented the muselet (muzzle in French). This was a steel cage that fitted around the cork and incorporated a metal cap which fitted over the top of it. These caps often bore the mark of the maker and are highly collectible. Others improved Jaquesson’s design and today a muselet is made from twisted wire, which gives it extra strength. A loop is also provided to help with opening.

Champagne is carbonated wine made from grapes from the Champagne Region of France; mainly Pinot Noir, Pinot Meunier and Chardonnay. During the secondary fermentation process riddling is needed to in order to remove the lees from the wine. This involves storing the bottles at a certain angle in wine racks called pupitres, turning the bottles 1/8th of a full turn each day and changing the angle every 2 days until the bottle is facing downwards and the lees collect in the neck. Riddling is the principle reason why, until secondary fermentation has completed, champagne was stored in bottles no bigger than a magnum. It would be almost impossible to move some of the larger bottles, for example a Primat or a Melchizedek. Today, the riddling process is largely mechanised so doesn’t quite need the level of human intervention by riddlers they once did.

Champagne is French, how come the British Named the Bottles?

Using the names for champagne bottle sizes referred to above is almost a uniquely British practice. However, although the Nebuchadnezzar was recognised as a bottle size in France in 1897, the French didn’t import Jeroboams and Rehoboams from the English until around the turn of the 20th Century. There is no evidence to suggest that the Methuselah was know in France until post WWII and it was the 1960s before Salmanazer was adopted by the French.

Today, only the House of Drappier puts champagne in Primat and Melchizedek bottles.

There is an additional bottle, the Sovereign which holds 34 bottles. However, the only manufacturer to use this size is Taittinger.

A bottle containing 20ml can hardly be called a large champagne bottle, it would only contain an Imperial Pint of champagne. Such a bottle was designed and manufactured by Pol Roger for Sir Winston Churchill, who was reputed to drink champagne with his breakfast.

The oldest bottle of champagne sampled dated to 1825 and was opened by wine experts in 2009 who reported it to have matured well and have taken on a caramel and truffle-like taste.

Champagne comes in all price ranges, with discount supermarkets offering very decent products at a reasonable price and certainly much cheaper than the $2.07 million dollar price tag paid for the most expensive bottle ever. Of course, it wasn’t just the champagne the buyer paid for; the bottle was diamond-encrusted.

Marilyn Monroe would have needed just over 8 and a half Melchizedek bottles of champagne for a very famous bath she once took.

Champagne, that premium luxury product, a symbol of opulence and everything that is good continues be to universally popular. Who would have thought that behind the froth and bubbles is a quirky system of champagne bottle sizes. You have to admit, it’s much more exciting to order a Salmanazer than to just asking for twelve bottles. Remember too, you have no excuse now for losing the pub quiz tie-break because you don’t know how many bottles of champagne are in a Balthazar. To read more about brands, check out our article on the best champagne brands out there.